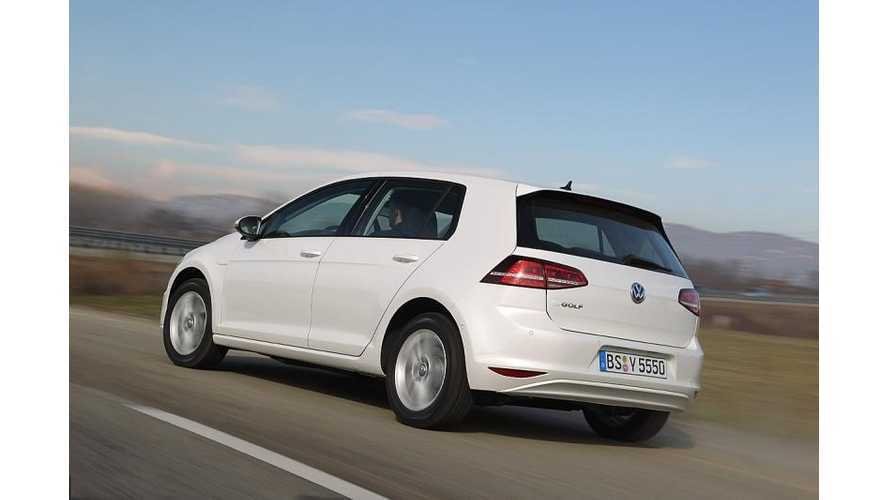 Limited details and first-ever photos of the production Volkswagen e-Golf have leaked out ahead of its official debut at the 2013 Geneva Motor Show in March.

The front-wheel drive electric e-Golf (based on the entirely new Mark VII platform) will reportedly churn out 115 horsepower and an estimated 199 pound-feet of torque.  Top speed is tentatively set at 84 miles per hour and the 0 to 62 mph dash is listed at a rather leisurely 11.8 seconds.

While performance may not be its strong suit, range should be above average.   The VW e-Golf is fitted with a26.5-kWh lithium-ion battery mounted under the rear seats.  VW says range is up to 109 miles, but that's a European figure.  85-ish miles seems more accurate a guess as to its future EPA rating.

Over in Europe, the e-Golf will offer three driving modes: Normal, Eco and Range. Normal is, well, normal.  Eco cuts max power to 95 hp and drops top speed to just 74.5 mph.  Range mode is a bit unusual as it deactivates air conditioning and slashes speed to 59 mph.  It's not clear yet if VW will offer all 3 modes on US-Bound e-Golfs.

What is clear is that this electric hatchback is US-bound.  Volkswagen intends to launch the production version of the e-Golf in the US in 2014.  It will launch in select European countries in late 2013.