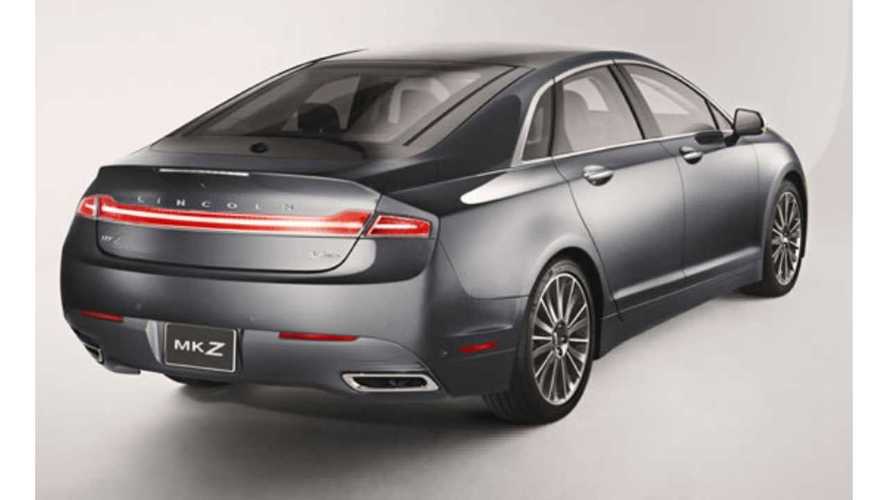 Will We See A Lincoln MKZ Plug-In?

Ford Fusion Energi sales finally get underway this month, and buyers of Ford's luxury Lincoln lineup are hoping the Fusion does well...or maybe not.

Last year, Jim Farley, who is global head of sales and marketing at Ford, said that if the Fusion Energi is received well, that engineers can expand the Lincoln lineup to also allow the new luxury MKZ to accept a plug.

"...but if there is demand for a Lincoln plug-in, Ford engineers can deliver it (the MKZ)."

The reason why the two go hand-in-hand, is because the Ford Fusion Energi and the Lincoln MKZ both share Ford's CD4 platform, so adding the plug-in option to the MKZ is a fairly straight forward operation.

The same non-turbo 2-liter 4-cylinder engine that is found in the Fusion Energi would also be found in the MKZ, but all the features of the top of the line Lincoln would be available on the plug-in platform; similar to what the upcoming Cadillac ELR is to the Chevrolet Volt.

However, even more recently at the New York Autoshow, FordInsideLine talked to Fusion’s Marketing Manager, Samantha Hoyt, and came away with a completely different take on whether or not the Lincoln MKZ will see a plug-in option.

Like Mr. Farley earlier, Ms. Hoyt also said that whether or not the MKZ receives the 'Energi treatment'' is dependent upon the sales of the Ford plug-in...but in a more negative way.   After speaking with the Fusion marketing boss, FordInsideLine came away from the conversation with the understanding that, if the Fusion Energi's pricepoint was not accepted by the market, Ford would want an alternate venue to get a return on their investment; enter the Lincoln MKZ plug-in.

The standard (and hybrid) Lincoln MKZ has a starting price of $35,925 (up to $47,395) and could likely absorb the added cost of the plug-in powertrain more easily in comsumer's minds than the Fusion,  The standard Fusion starts at $21,700, with the Fusion Energi model beginning at an 80% premium to that model at $38,700.

The MKZ Certainly Has The Interior Comfort You Expect From Lincoln

What do we think?  Regardless if the Fusion Energi is received well or not this month, it probably doesn't matter.

Every Ford guy we have ever spoken to references the Lincoln MKZ as a real possibility, and with so little extra R&D dollars needed to produce it, how can they not?

The likelihood of the MKZ plug-in is also compounded by the fact that Ford is desperately trying to re-brand Lincoln (now officially known as the Lincoln Motor Company) "to a new generation of progressive luxury buyers."  And those progressive buyers are not looking for Town Cars anymore.  Lincoln needs a plug-in for the brand, and this is where they will find it.

Also of note for readers outside of North America:  The Fusion Energi is renamed the Mondeo Energi, but unfortunately you likely won't be receiving it until mid-2014, thanks to some recent quality issues ramping up production.