2013 Nissan LEAF Rated at 75 Miles Of Range, Now At Dealerships 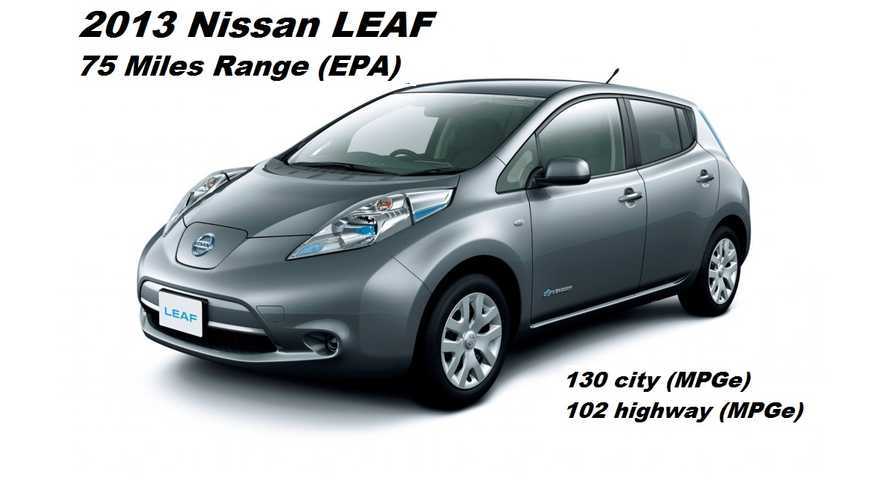 Thanks to US-made Nissan LEAFs actually arriving at dealerships, we can tell you that the 2013 Nissan LEAF (via the car's Monroney sticker) has been rated by at an EPA estimated 75 miles of range.  Also of note the combined MPG equivalent is rated at 116 miles, with 130 MPGe city/102 highway.

Some consumers had expected the increase to be much larger over the outgoing 2012 model, especially given the previous 14% range increase in Japan that was announced late last year. (using the Japanese JC08 standard, the 2013 LEAF range moved to 228 km from 200 the year prior)

However, Nissan executives in the US had already warned us (before the EPA results were known) that new range figure would not be a significant jump, due to the testing procedures in place.

We should note, that many drivers in cold climates will notice a significant increase in range during the winter (on the SV/SL models as compared to previous Model Year LEAFs) thanks to a new, more efficient heating system that uses only a fraction of the outgoing LEAFs unit.

Annual fuel cost estimated by the EPA was adjusted down from $561 to $500, giving the 2013 LEAF an estimated "$9,100 in fuel savings over 5 years" when compared to the average vehicle.

Photo credits to VRWL at mynissanleaf, who also has a nifty online business at EVPlates.com if you care to check it out and customize your plug-in.  Also, a hat tip to InsideEVs reader John Hollenberg.