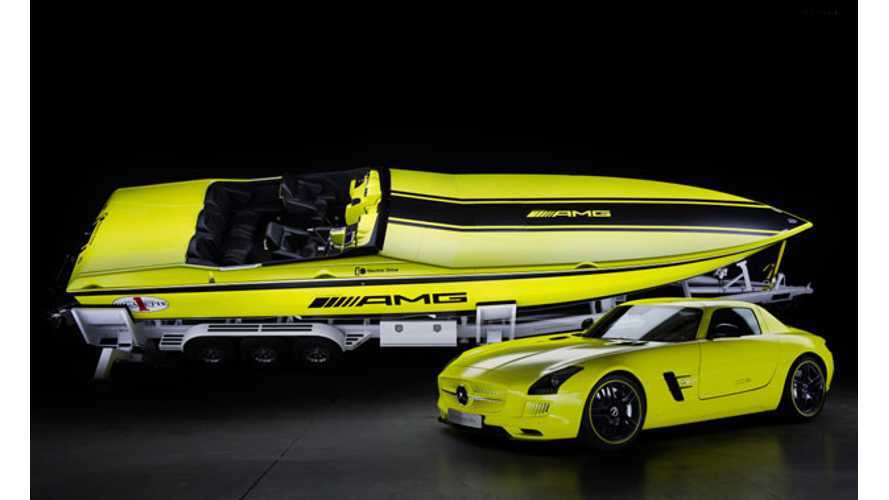 Mercedes-Benz just unveiled a battery-powered machine that cuts through water in a similar way to how its SLS AMG Coupe Electric Drive carves up the roads.

It's called the Cigarette AMG Electric Drive Concept and it's a pure electric monster that cranks out 2,221 horsepower and 2,213 pound-feet of torque.  Oh, and it's a boat.

The Cigarette AMG Electric Drive Concept borrows several components from the spectacular SLS AMG Coupe Electric Drive, but due to the high resistance of water, the cigarette boat had to be tuned to the max.  The absolute max!

It's dubbed the "world's most powerful electric drive powerboat" and boasts a top speed of over 100 miles per hour.  Its lithium-ion battery pack is outrageous at a listed capacity of 240 kwh.  Its hp rating is ludicrous and its torque is shocking.   Its emissions?  Zero.

Boats of this caliber are few and far between, but we'd rather use this opportunity to again highlight the equally amazing SLS AMG Coupe Electric Drive.  Mercedes-Benz says this electric gullwing is the most powerful vehicle in the AMG lineup.  Its four electric motors combine for 740 horsepower and 737 pound-feet of torque. The AMG Electric Drive can zip from 0 to 62 miles per hour in 3.9 seconds.

Unlike the flashy cigarette boat, the SLS AMG Coupe Electric Drive isn't only a concept.  At some point in 2013 it will enter the production cycle, but few can afford it.  The cost of entry is estimated to be a staggering $535,000.  Check the car (and some more specs on it) here.