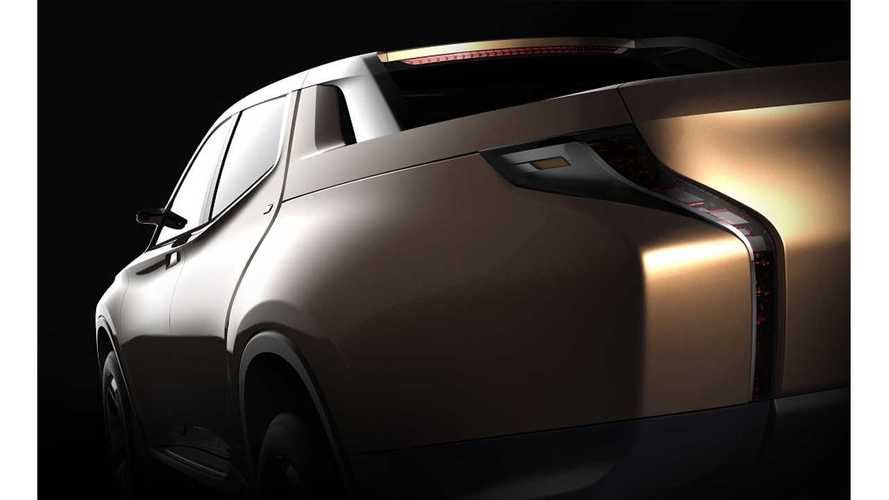 Early next month at the Geneva Motor Show, Mitsubishi has announced it will be debuting two brand new concepts indicating where the company thinks the future of the plug-in electric car is going.  Naturally, teaser shots of the vehicles are part of the equation.

Adding to the Outlander PHEV, which is already on sale in Japan (and coming to the US in January of 2014), Mitsubishi says that the GR-HEV, a sport utility hybrid truck would be an ideal lineup running-mate.

The GR-HEV is actually a 4WD, diesel-hybrid system in a pickup truck.   Mitsubishi claims that the SUT's  "high fuel-efficiency clean diesel engine with a high-output motor and battery system achieves on-road CO2 emission levels of below 149 g/km to give it environmental performance among the best in its class."

Mitsubishi says that thanks to over 3 years of customer feedback on the i-MiEV, as well as some serious advancements in electric vehicle technology, the company now feels you can take the EV outside the city, with what it sees as possibility the "next generation of compact EVs."

"As a showcase of the various technologies, MMC intends to introduce across its range of global vehicles, this sleek Concept CA-MiEV vehicle which can accommodate next generation EV systems and high density batteries. Lightweight with advanced aerodynamics, the CA-MiEV will offer a 300 km (186 miles) driving range, perfectly suited for suburban and country daily life."

Once again, we would suggest readers outside Japan take the 300km/186 miles estimated range with a grain of salt, as the Japanese JC08 standard is at play here again.  Still, 300 km on this standard does translate to about 110 miles on the more reasonable US/EPA system, which is much better than the 62 miles currently found in today's i-MiEV.

It should also be noted that this concept CA-MiEV is more of a global platform, and is (thankfully) one size class larger than the current generation.  We hope both these vehicles get the green light in some form or another in the future.

The Geneva Show begins March 5th (open to the public on the 7th) through to the 17th, and we will bring you lots of non-shadowy pictures then.