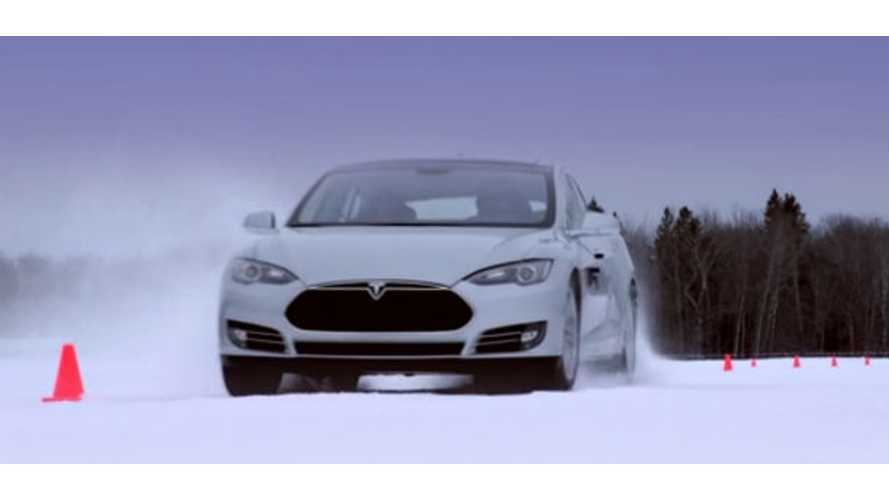 This story is spiraling out of control with nearly all major news outlets covering it from every angle imaginable.

At the heart of matter is that Tesla Motors refutes the accuracy and accounts of a Model S review published by... The New York Times.    The Times' reviewer insists that the Model S doesn't meet range claims in cold weather, but Tesla argues that the range in cold weather claim made by The Times is "a fake."

Here's why Tesla needs to care about this scathing and, possibly even inaccurate review: Tesla's stock prices fell the most in two months immediately after The Times published its Model S review.  Ouch!

On February 8, The Times published review by John M. Broder describing how the Model S failed to meet Tesla's "under ideal conditions" range claim of 300 miles (the official EPA range rating is 265 miles).  Broder was driving the Model S in temps as low as 10 degrees Fahrenheit, which Tesla openly admits is not fitting of its "ideal conditions" claim.

Leave it to the outspoken Tesla CEO Elon Musk to be the first to fire back.  Upon receiving word of The Times "fake" reviews. Musk responded by tweeting:

Musk even told CNBC that the newspaper's report on the Model S' "range in cold" is a "fake."

After The Times published the "review" a blog post by Broder appeared on NY Times site Wheels.

In the initial February 8 review, New York Times Broder claimed a Tesla Model S he drove from suburban Washington, D.C. to Connecticut did not meet claimed range expectations, which forced Broder to suffer sever range anxiety, frozen feet and white knuckles.  To conserve range, Broder claims to have driven below the speed limit and turned down the heat.  But even that didn't work as Broder's Model S had to ultimately be towed to a charging station.

"Was completely factual, describing the trip in detail exactly as it occurred. Any suggestion that the account was 'fake' is, of course, flatly untrue."

Murphy added that Broder "followed the instructions he was given in multiple conversations with Tesla personnel" and that "there was no unreported detour."

Now, we're not here to suggest that one side is right and the other is wrong, so we're not going to dive into Broder's claims.  But we've witnessed an 85-kWh (the same as the version tested by Broder) Tesla Model S cover way more (over 423 miles) than the "some 200 miles " that Broder was attempting, but failed.  So, is this simply a case of your mileage will vary?  Or is Broder trying to hide something?

Tweet by Musk in response to NY Times review.

Ultimately, it's up to us all to decide which version of this account is accurate, but as Musk tweeted:

"Tesla data logging is only turned on with explicit written permission from customers, but after Top Gear BS, we always keep it on for media."

So, we're thinking Tesla has some inside info on this one that will discredit Broder's account.

Of course, we suggest you read the NY Times review and follow-up blog post on the Model S before deciding who's in the right here.  Follow the first two links below for Broder's account and reaction to driving the Model S.

We'll update you on this developing story when Tesla releases its promised blog post, which will supposedly refute cold-weather range claims by the NY Times.

Update (video interview and partial transcript with Musk below): Tesla CEO speaks to Bloomberg West, and talks about the reporter's trip between Tesla's Supercharger stations, "He took an unplanned detour through downtown Manhattan in heavy traffic, instead of going on the interstate to the next supercharger station." Musk also points out excessive speeds on the trip.

"I do not think this is a he said, she said situation. It is really black and white. The facts are the facts. He did not charge the car to full capacity, not even close. He then took an unplanned detour through downtown Manhattan, through heavy traffic, instead of going on the interstate to the charging station. He also exceeded the speed limit quite substantially, which decreased his range. If you do all those three things, which we were clear should not be done and obviously common sense suggests should not be done, then you will not be able to go as far. If you did not fill a gasoline car's gas tank far enough, then went on a detour and ran out of gas, you should not be surprised if that occurs."

"We will publish the actual logs on the car and it is crystal clear."

On the data Tesla records:

"We are very sensitive to privacy, so these logs are only turned on with the explicit permission of the customer and a signature. For media drives we turn on logging, which tells us the position, speed, what someone is doing with the car in terms of charging. We had a bad experience in the past with a show called "top gear" where they pretended the car ran out of charge and pushed it home. We looked at the logs and found that it had 50 miles of range left and they were faking it. After that, we trust but verify. In this case, it seems like we have to do that again."

"A bit of a longer drive would be no problem, but what you cannot do is combine all three things, which is not fully charge the car, go on an extended detour and drive really fast. You cannot do that in any car--whether it's a gas or electric car--and expect to achieve the top range."

"We have taken great pains to ensure that our car works very well in cold and many Model S and before that, Tesla Roadster customers, in extremely cold climates. In fact, our number one Tesla Roadster owner owns four cars in northern Norway where it is permanent midnight during the winter, incredibly cold, and he uses it as his daily driver. The car is designed to do very well in the cold, and we have an intelligent thermal control system that is able to take heat from the motor into the battery pack and in cold weather will actually close shutters in the front of the car to keep the car insulated. It is actually really good. We have taken great pains to ensure that the car works very well in the cold and that is why we are incensed by this ridiculous article."

"We're obviously still in the early days of the supercharger network. So, for example, in California where we have more supercharger stations, we have them roughly every 100-140 miles, whereas on the East Coast they are about every 200 miles right now. In a few months, they will be a similar density, there will be a super charger every hundred miles or so. It will be more convenient. That is why we were so explicit with this New York Times reporter that since we only have a small number of super chargers in the East Coast, it is important to stick to the instructions in the agreed upon plan and not deviate. In a few months when we have more supercharger stations, it will not be a problem, but you just can't do it now."

"We are seeing rapid improvements in technology. For example. our Tesla Roadster had a range of up to 250 miles for the Model S, even though it is a bigger car, it has a range of 300 miles. Ironically, a different reporter from The New York Times did a test drive several months ago, late last year, and was able to achieve over 300 miles on a single charge. It's just weird...I guess it was a different situation, but nonetheless, if one New York Times writer is having trouble with 200 miles and the other is getting 300 miles, it just does not make sense. It seems that within the New York Times, the right hand does not know what the left hand is doing."

"If we have been wronged and the facts are on our side, I believe in speaking out. It is not as if I do this all the time. Several thousand articles have been written about Tesla and I have only objected to a few of them. Certainly many of the articles have been critical, but I am not outspoken about the ones. The times I am outspoken is when it is a publication that has very wide coverage and where it appears to be credible. That is where we really need to correct the misimpression."