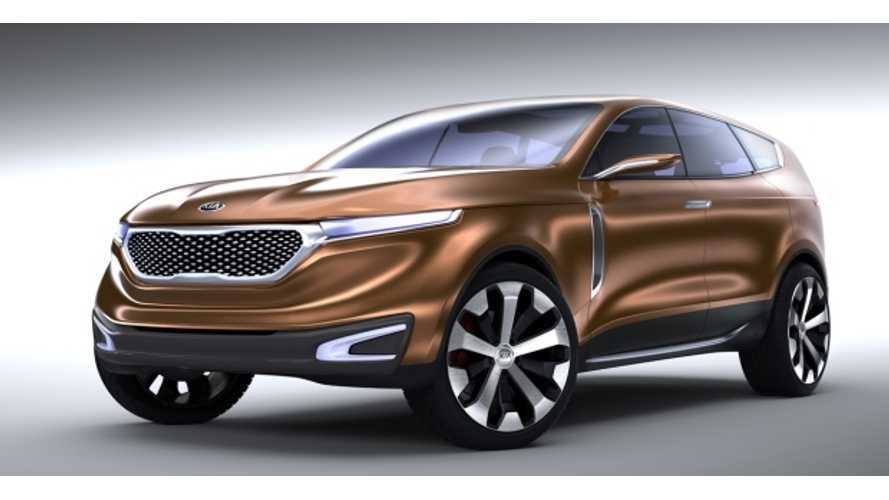 Arguably, the star of the 2013 Chicago Auto Show is the Kia Cross GT Concept.

Yes, it seems a Kia stole the show, but this isn't an ordinary Kia.

On paper, the Cross GT Concept is extraordinary, but remember, it's only a concept.

Here's how the Cross GT plays out on Kia paper (press release in plain English):

"Utilizing a state-of-the-art 3.8-liter V6 hybrid, 8-speed automatic and torque-vectoring all-wheel-drive, the Cross-GT’s powertrain matches the sophistication of the exterior and interior designs.  Backing the V6 is an evolution of Kia’s parallel hybrid system, a pancake-shaped electric motor sandwiched between the V6 and transmission.  The electric motor is neatly packaged under the rear floor.  Combined, the V6 and electric motor produce 500 lb.-ft. of torque and 400 horsepower, with an all-electric range of 20-miles - sufficient to enable exhilarating performance, while delivering superior fuel economy and fuel efficiency."

This futuristic concept presents Kia's vision of where the motoring world is headed.  It's a luxury crossover with a unique interior and would supposedly compete with vehicles like the Infiniti FX and Lincoln MKT

Kia is broadly hinting that this is close to the real deal, but oddly makes no mention of it being capable of plugging in.  Of course, we conclude it's a plug-in hybrid based on its 20 miles of electric-only range, but we're still perplexed as to why Kia doesn't specifically mention this capability.

The Cross GT is loosely based on Kia's earlier concept, a German-designed vehicle called the GT.  However, the Cross GT hails from Kia's design center in California.

Is the Cross GT just a concept?  Well, here's what Kia has to say in regards to that question:

"As witnessed by the introduction of the all-new Cadenza at the recent Detroit Auto Show, our customers are looking to the Kia brand to offer relevant vehicles in the premium segments that take value to new levels of sophistication.  The Cross GT is the next logical step in that evolution.  And while only a concept today, it signals one possible design direction we may explore for the future."

There's little left to say of the Cross GT, but we think it's a stunner.  Check out the pics and then drop your thoughts in comments below.