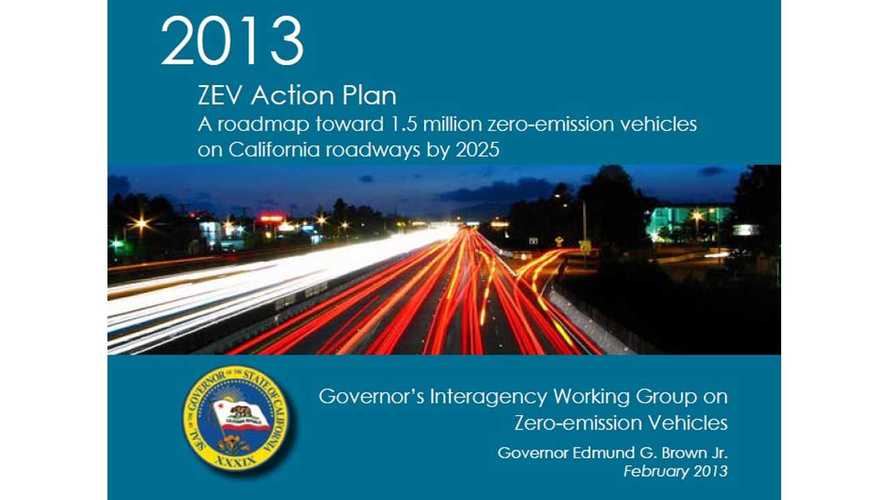 California knows how to shoot big.

The Office of California Governor Edmund G. Brown, along with other state agencies, have published their 2013 Zero Emissions Vehicle (ZEV) Action Plan.  As part of the plan, which was put into motion last March, the Governor is looking for the infrastructure to support 1.0 million ZEVs on the road by 2020, and 1.5 million actual ZEVs on the road by 2025.

A ZEV, or Zero Emission Vehicle, is not simply a pure battery electric vehicle in this case, but also includes hydrogen fuel cell electric vehicles (FCEV), and plug-in hybrid vehicles (PHEV) like the Chevrolet Volt.

Two Out Of Three Of These Options Have A Viable Future

While the 1.5 million number is the headline grabber, the true aim of the the plan is to achieve long-term emission reduction targets.  California is looking to reduce transportation-based greenhouse gases by 80% of 1990 levels by the year 2050.

The first step of this mandate, is to have all major cities in the state zero emission vehicle-ready in two years time.  This readiness includes a state-wide charging infrastructure, 100 hydrogen refueling stations, and also a lessening of the red tape that it takes to get such stations, and other 'green-projects' permitted.

The rollout of the plan has four major components:

Specific to government fleet purchases, the Action Plan mandates that no fewer than 10% of state departments’ vehicle purchases will be ZEVs by 2015, 25% by 2025.

To say there is a very specific (and numerous) outline of the goals to be accomplished under each of these headings would be an understatement; so much so that we would direct you to the Governor's Action Plan's PDF outline directly if interested.