Ex-Volvo CEO: "Electric Vehicles Have No Mainstram Role In The Foreseeable Future" 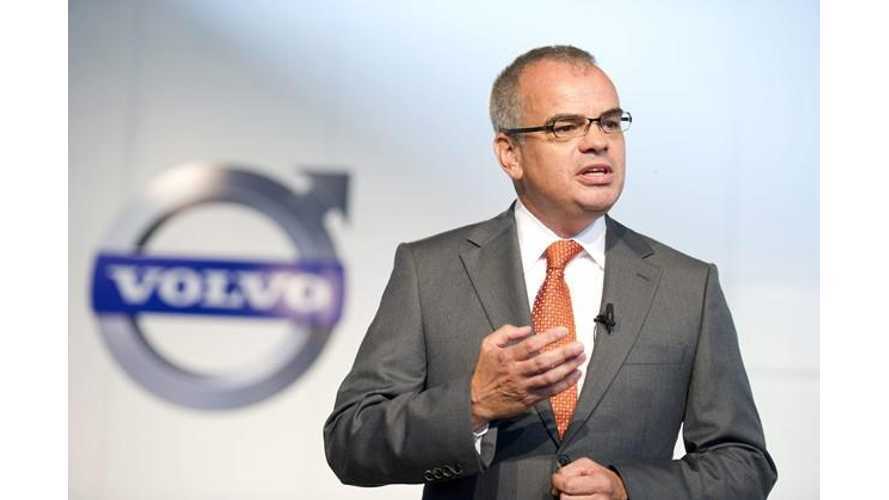 Having recently been released as CEO of Volvo this past October, and finding himself out of work for the first time in 27 years,  Stefan Jacoby made himself a little more unhireable by taking the time to talk down electric cars at media lunch organised by the news agency, headlineauto.

According to Jacoby, fear and cost, are the main deterrents to electric vehicles going mainstream, an event that won't happen for at least 10-15 years:

"If the battery goes down on their cell phone people feel really bad. If it’s your car in the middle of a traffic jam you will feel even worse."

Mr. Jacoby said that he feels electric vehicles, like the Nissan LEAF, can provide a roll now, but not for most people,  "...they will have some sort of role, for example, in cities as taxis or urban delivery vehicles, but for a normal household, no."

Volvo itself has had a long history of not being thrilled about developing (or selling) plug-in vehicles, especially the all electric ones.  In 2011, Volvo made a small fleet of C30 electrics for testing, but nothing came of them.

Recently however, the company did launch an extended range hybrid, similar to that of the Chevrolet Volt, but with a much higher price-tag, and using diesel instead of regular gasoline, the V60 PHEV.  The V60 gets about 31 miles of range (NEDC rating) from a 11.2 kWh lithium battery, for a cost of about £50000 ($78,000USD).

“I have made myself unpopular before by saying this, but I do not believe they have a mainstream application in the foreseeable future.   The reasons are clear.  The price and the uncertainty of what happens to the batteries as they lose charge-holding capacity, and the emotional distrust of a car that can leave you stranded on a highway in traffic and 40-degree heat are all problems.

“Think how you feel when your mobile phone runs out of charge and there’s nothing you can do – the feeling of sitting in a car that has run out of charge would be much worse.”

During his tenure at Volvo, Mr. Jacoby had been at odds with the company's Chinese owner (Geely) over expansion into that country,  as well as Volvo's overall direction.  In September he suffered a mild stroke, and was (courageously) replaced by Volvo's Board Of Directors while he was on medical leave.  Volvo director Håkan Samuelsson was pegged as the new man to lead the turnaround.