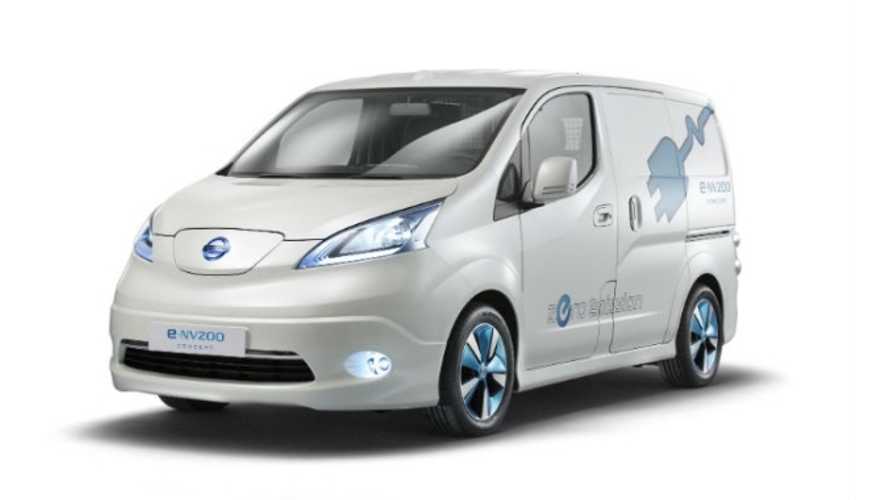 In 2014, Nissan will launch its LEAF-based electric e-NV200 van, but will it be offered to the general public or be a fleet-only vehicle?  The answer to that question is not known at this time, but it seems Nissan is showing at least some interest in making the e-NV200 available to the masses.

With the battery tucked away, the e-NV200 has ample cargo space.

First some background information is needed.  The e-NV200 borrows its electric powertrain directly from the Nissan LEAF.  Practically nothing is altered, so the e-NV200 gets an 80-kW (110 horsepower) electric motor and a 48-module, 24-kWh lithium-ion battery pack.   Range is expected to be a bit less than the LEAF due to the fact that the e-NV200 is a taller, wider and heavier vehicle.  The NV200 was designed from the outset to feature either an ICE setup or electric power.   That's why there's no compromise on interior or cargo space in the switch over to electric.

Let's now move forward.  Currently, Nissan is gauging fleet interest on the e-NV200.  Nissan took the e-NV200 to Barcelona, Spain to allow major fleet operators the opportunity to test the electric van.   Overall, the experience was positive, according to Nissan.

“We were blown away with the response and we already have leasing companies and fleet operators who want to trial the vehicle, and some who want to order a fleet of vehicles for urban delivery use.  After driving the vehicle on the two day trip they could immediately see the business benefit of running electric vans across specific parts of a fleet. Commercial vehicles are working tools and our guests recognized both the savings in fuel costs and reduced emissions offered by the e-NV200.”

The Barcelona trip follows several ongoing, real-world trials that the e-NV200 is currently involved in, including with British Gas, FedEx and the Japan Post Service.

That's all fine and dandy, but if the e-NV200 is truly this good, then why limit it to fleets only?  There's certainly a market for a cargo-hauling electric vehicle outside of fleets and when fitted with two removable rear seats, the e-NV200 is, without a doubt, more versatile than the LEAF.

It's confirmed for production in late 2013 with its initial launch set for early 2014, but there's no definite word from Nissan on whether or not its coming to the US outside of a fleet-only vehicle.

As we see it, Nissan has nothing to lose by giving the general public a chance to buy the e-NV200, but at what price?  It would certainly fail if priced in the $50,000 range, as was the case with the electric version of the Ford Transit Connect, but by being LEAF-based, Nissan should be able to keep pricing in check and come in well below $50,000.

We say, give it a shot, we'd definitely by interested in buying one, but Nissan only says it's a "potential mass production vehicle."  Let's hope that potential becomes reality.