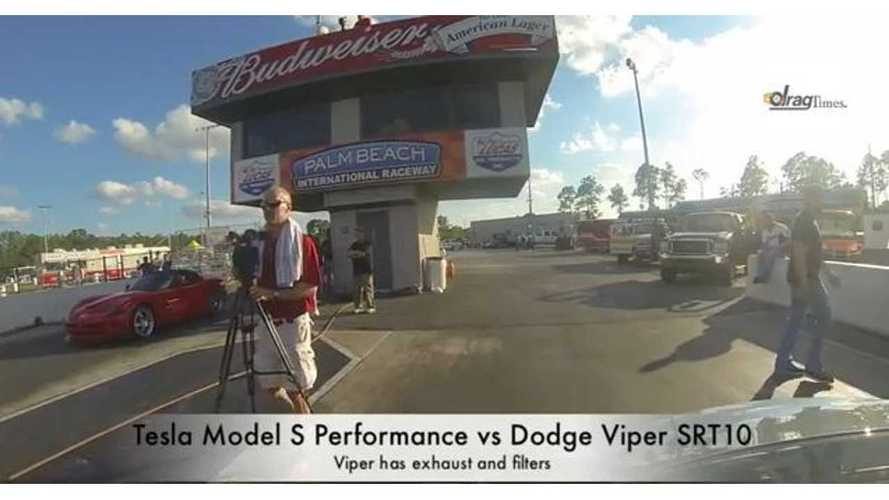 Is the Tesla Model S Performance version the world's quickest production electric vehicle?  According to the National Electric Drag Racing Association (NEDRA), it indeed is.

At a StreetCarDrags.com event this past weekend at the Palm Beach International Raceway, a Model S Performance tripped the quarter-mile lights with a time of 12.371 at 110.84 miles per hour, thus making it the world's quickest 1/4-mile production electric vehicle.

Yes, that's a Dodge Viper way back there.

Even more impressive was the Model S' recorded 0 to 60 mph time of 3.9 seconds.  That's well below Tesla's quoted figure of 4.4 seconds.

The folks over at DragTimes were responsible for the record-setting run and describe the day's events as follows:

"We started out with a full charge on the Tesla which indicated a range of 314 miles, after a 78-mile trip to Palm Beach International Raceway at 70 mph, the Tesla showed a range of 205 miles left.  We made a few passes in the car shortly after arriving and the car was amazingly consistent, running two back-to-back 12.678 passes @ 108 MPH.   We then drove the car over to the RV parking area at the track and plugged into their 240v 40 amp charging station."

Throughout the course of the day, the Model S was pitted against several vehicles, including a 2005 Dodge Viper SRT10.  Video of that particular race is posted below.

Next time out, DragTimes hopes to switch the Model S' 21-inch wheels for a set of lighter 19-inchers, a swap that will likely improve the Model S' 0 to 60 mph and 1/4-mile time.

Lastly, the Model S was weighed prior to running and was found to tip the scales at 4,690 pounds.