Cadillac To Be Single Production Run Priced From Mid $60,000? 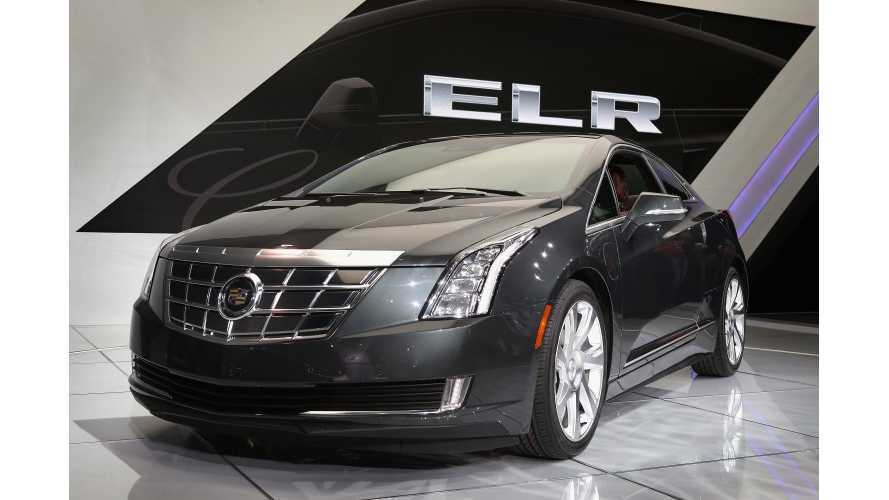 2014 Cadillac ELR Debuts At The NAIAS

It had been assumed for some time that not only was the ELR coming, but that it might prove to be long-term competition for other high end plug-in vehicles, like the Fisker Karma and the Tesla Model S, as well as other conventional high end luxury offerings from the likes of BMW and Mercedes.

And while normally our suggestion that the Cadillac may be a "one and done" production run at GM's Hamtramck facility in the fall (with units to go on sale in the first quarter of 2014), would be backed up with a tidbit of information from here, a random quote from there, and some other speculation to piece the rumor together.  That is not the case today.

This week we had 5,000 auto journalists vs. a handful of Cadillac execs at the NAIAS, along with one amazingly positive 'pocket' reveal given by Caddy to Car & Driver (amazing what advertising dollars can do), with everyone wanting a quote and a scoop for themselves along the way.

So, for today, lets just copy and paste all their quotes (with a couple of our own), and you can make up your own mind.

"ELR marks a fresh, even surprising new dimension of Cadillac,”  Ferguson (Cadillac global vice president) said. “An additional aspect of ELR’s appeal to will be exclusivity. It will be a specialized offering produced in limited numbers.”

"The ELR is scheduled for production at the end of 2013 calendar year and those units will be on sale the beginning of 2014" - Darin Geese, ELR product manager to Car & Driver

Quote to Mike Colisa at AN (sub req'd):

"Cadillac ought to have an air of exclusivity," Cadillac brand head Bob Ferguson told me. "The manufacturing for this vehicle will be limited. We're saying, 'Get in fast and buy it. We're only going to make so many, and for so long.'"

On the price estimates starting from mid 60K, we have the original "go to" statement from the man that knows, Bob Lutz (father of Volt, and former GM Vice-Chairman) to our own Lyle Dennis when the Cadillac ELR was being developed:

He (Lutz) also noted the car would cost 'about two Volts'"

A sentiment that was backed up by Car & Driver's Csaba Csere, who got a 'pocket' exclusive from Cadillac (video of which below - starting from 6:25):

"...the pricing is really not finalized for the vehicle" said Darin Geese, ELR product manager, "but we can kinda tell you that its not in the realm of the supercar, and certainly not in the realm of your conventional car.  We are truly a Cadillac, truly a luxury vehicle.  Probably somewhere in between what you see as a Fisker (Karma - from $102,00) and what you see as a Volt (from $39,995)"

Then in Car & Driver's video, they flash this graphic that puts the price starting at $67,500 (up to $82,500 loaded), before government incentives.

And while we realize this is an estimate for the car, we also realize that this is from the same 'pocket' exclusive (that is basically a 12 minute infomercial for the ELR) and that GM does a lot of advertising with Car & Driver.  One would could reasonably assume there is some insider ball-parking happening here that is not being publicly verbalized by Cadillac at the moment.

Car & Driver Puts An Estimated Price Tag On The Cadillac ELR After Netting An Exclusive.

We checked in ourselves with Brian Corbett at Cadillac Communications, but outside the pressure of the show, or under televised interview lights we got a more polished answer that could be translated really anyway the reader wants it to:

"Bob (in reference to the first quote above) was merely trying to state that ELR is luxury, and luxury is not about high volume, mass appeal. Luxury by its nature is exclusive...Right now we're focused on a successful launch of the ELR and delivering the highest quality, performance and customer service standards for consumers and not speculation regarding future product decisions."

So, what is the ELR going to be?  A limited production run from the mid 60s, or a ongoing vehicle priced in the sweet spot to sell?