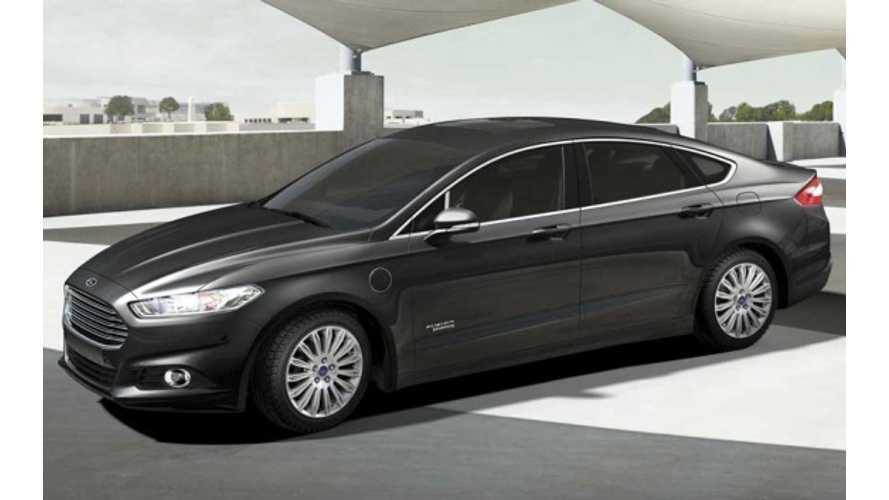 Given all the recent issues with Ford's hybrid fuel efficiency numbers apparently not translating in the real world, and reports of the C-Max Energi, an extended range, plug-in hybrid also having trouble reaching its EPA rated 21 miles of range, it was surprising to see all the pomp and circumstance surrounding the new Fusion Energi fuel efficiency ratings and range specs at the NAIAS yesterday...the big screens, the dancing girls, and the big speech by the CEO as the car came down from the ceiling.

Sure The Ram Is The Truck Of The Year, But Look At Our Huge Stage!

Or rather, "it would have been surprising," because none of that happened.

Ford spent the show doing what it does best.  Selling trucks.

And it was the Ford Atlas Concept, not the Fusion Energi, that came down from the ceiling that stole the high-power show.

Had it not been for a total stranger who spotted me in my official InsideEVs jacket and ballcap (not available in stores), and asked me about the Fusion Energi and how many miles of range it got and what the extended range MPG rating was, I maybe would never have known that information was even available.

I believe my answer today was, "Um, I don't know, it'll probably be rated over 20 miles, no clue on the MPGs.  We will have to wait and see what Ford says."

But given the car is expected to go on sale this month (at a starting MSRP of $39,495), my OCD to know all the facts and figures on every plug-in kicked in, and I thought perhaps I had just missed the announcement.

Naturally, I check out the site here first in case one of my fellow writers had put out a story. Nothing.

Then to the trusty google search; fearlessly I typed, "Ford Fusion Energi Electric Range,"  which returned nothing but estimates.  Then, "Ford Fusion Energi MPG". Again, nothing...unless you count endless links to Ford's earlier announcement of a combined 100 MPGe rating (which is essentially impossible to check the validity of given the variance in driving style and usages of the vehicle)

Finally, I headed to the bowels of the EPA!  And sure enough, there it was!

Will these numbers hold up under public scrutiny?  Or will they come under the same pessimism as the C-Max hybrid/energi and Fusion hybrid figures?

We are betting the latter.  It would not surprise us even to see them restated at some point; and that is why we'd wager we have heard barely a peep out of Ford about them this time around.

Update:  Apparently we have shamed Ford into officially releasing something on the numbers (or so we would like to think anyway), as Ford has put out a statement just a scant 6 days after it was published by the EPA.  Link to Fusion Energi release here.  Interestingly, they have still chosen not to mention the extended range MPGs in the bulletin.