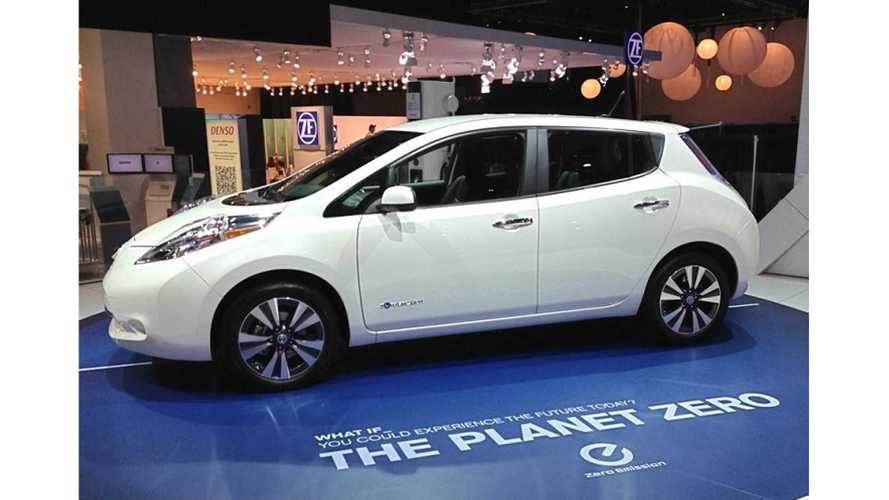 Nissan took a huge leap forward today in pricing the entry level LEAF at $28,800.  That is $6,400 cheaper (about 18% less) than the most inexpensive 2012 model on sale today.  With the federal incentive applied, you are talking a very enticing $21,300, and as low as $18,800 in California once their state rebate has been discounted.

Truly, being freed of the pressure from importing the car from Japan (and the yen) has meant a much more affordable car for North America.

“With nearly 50,000 LEAFs on the road globally, we are the leaders in zero emissions vehicles and our class-leading product just got better,” said Billy Hayes, Global vice president of LEAF sales for Nissan. “From the very outset, Nissan has continuously advanced and refined the affordable zero emissions vehicle ownership experience. Now customers won't have to pay a premium for owning a green car that's really fun to drive, and that's exciting.”

Only Minor Tweaks To 2013 LEAF Dash, But We Really Like The Darker Color

There is also a $850 destination charge, and Nissan is already promoting a $199 lease deal (which includes the destination).

While this price reduction out paces that of the Japanese-spec model that was released publically a couple months ago (12% less), we have been told to likely not expect a besting of the 14% increase in range announced in Japan (228 km vs 200 km) due to US EPA testing methodology.

To see all the technical specs and a model overview, check out the full recap here.  More photos of the 2013 LEAF can be found at the gallery here.

Top Of The Line SL Trim Of The Nissan LEAF