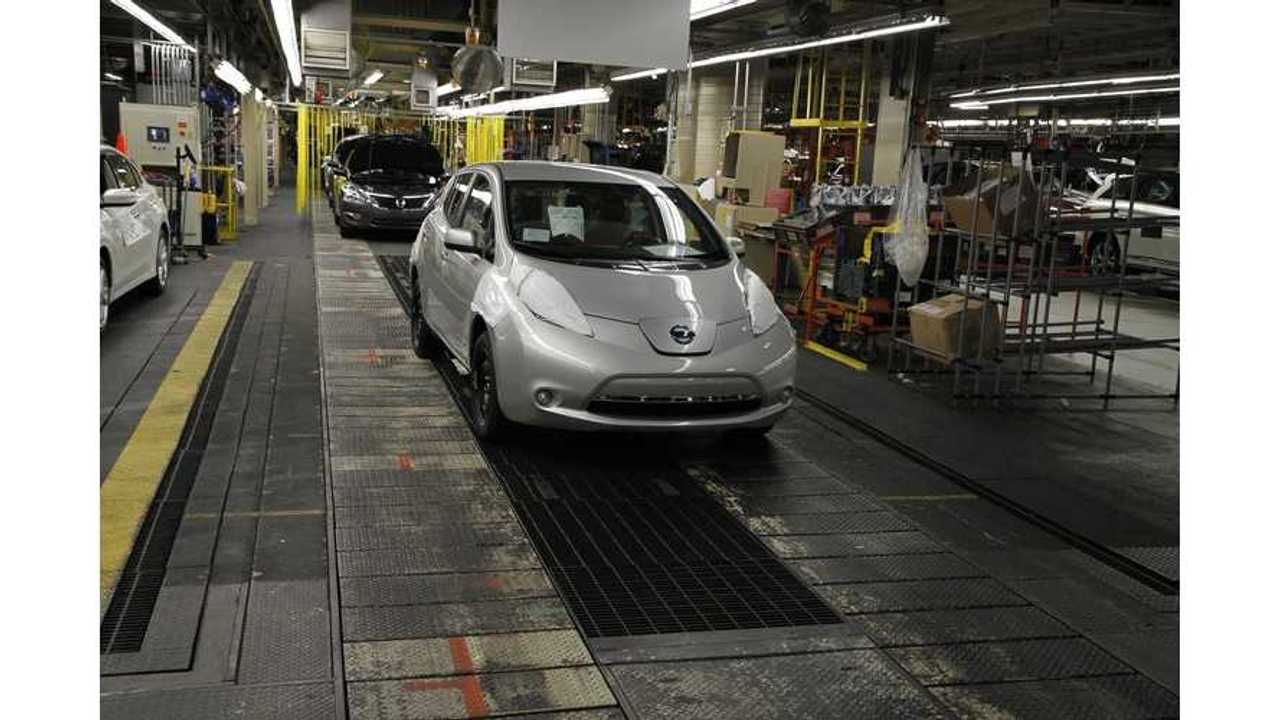 Assembly of the much anticipated US-produced LEAF is now underway in Smyrna, TN,  with production ramping up this week.  Just last month, the adjacent battery facility started to make 24 kWh battery packs in preperation for the car.

“Bringing assembly of the innovative 2013 Nissan LEAF to our award-winning manufacturing plant speaks to the flexibility, efficiency and talent of our U.S. workforce,” said Susan Brennan, Nissan’s vice president of manufacturing in Smyrna.

“Nissan has a 30-year history of building quality vehicles in Smyrna, and just like every vehicle we produce, the LEAF has met or exceeded everyone of our rigorous quality requirements.”

Nissan also states that adding the electric vehicle to the Smyrna assembly plant "required only a few process changes such as the addition of quality confirmation specifically for electric vehicles and special training for technicians."

“Process efficiency is a never-ending activity for us. We strive to create new internal benchmarks in efficiency with each new model. By assembling the LEAF on our current Altima and Maxima line, we are able to reduce costs by using existing equipment,” Brennan added.

For example, while gas powered vehicles receive fuel tanks and internal combustion engines when they come down the line, the Nissan LEAF gets a lithium-ion battery pack made at our battery plant next door and an electric motor produced at the Nissan powertrain plant in Decherd, Tenn.

“We truly have localized U.S. manufacturing of the LEAF’s major components across the board,” she said.

LEAF assembly in Smyrna will contribute to Nissan’s goal to manufacture 85 percent of its U.S. sales volume in North America by 2015, and having more local content will reduce exposure to fluctuations in foreign currency.

Nissan says that the addition of LEAF and battery assembly has resulted in the creation of more than 300 U.S. manufacturing jobs, a number that can increase with demand.

“The Nissan LEAF has expanded beyond early adopters and is now appealing to a broad spectrum of consumers.” said Brian Carolin, Nissan’s senior vice president of sales and marketing. “Since we launched the LEAF in 2010, we’ve learned that people are very attracted to the advanced technology and other amenities, but they are also looking for a more affordable price point.”

The 2013 Nissan LEAF features 240V (6.6 kW) charging that is almost twice as fast as the previous model, as well as an added trim level.  The S grade joins the SV and SL models.  Pricing is expected to be announced in the coming weeks.

Update:  Nissan has just announced the specs on the 2013 LEAF lineup.  If interested you can check them out here.