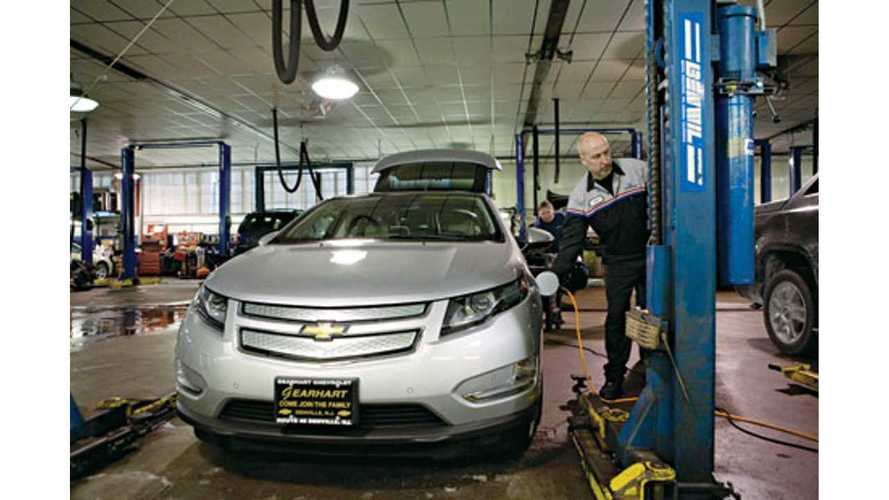 General Motors sent all of their Volt-certified dealers a bill for $5,100 worth of specialized tooling.  Some of Chevrolet's 2,614 Voltec dealers, estimated to be as high as 40, said they would rather not sell the car then.

Last year, according to GM spokeswoman Michelle Malcho, dealers spend between $1,800 and $2,800 on specialized equipment for the Volt.

However, beginning on January 1st, 2013,  Chevrolet wants local technicians to have the ability to remove and ship segments of the Volt's over 400lb battery in order to save costs.  Previously, the entire pack was removed and returned for service.

In order to be able to 'divide and conquer' the pack, dealerships need a $4,735 battery depowering tool to drain the battery before removing sections.

In an interview with Automotive News, Allyn Barnard (owner of Jim Barnard Chevrolet in Churchville), who has sold five Volts since the car's launch, said he has not yet recovered the first $5,000 he was required to pay for specialized tooling, and has now left the Voltec-certified program, "Going forward, the profitability would be really hard for us to justify the expense of the repair tools."

When asked about the number of dealerships that had refused to incur the new costs, Ms. Malco declined to put a number on it, but stated that they account for less than 1% of sales in 2012.

Some dealers are apparently suggesting that this is a move by GM intended to force out smaller volume dealers in favor for their larger volume-orientated dealers; a claim the GM spokeswoman denies, but notes that the top 300 dealerships do generate 70% of all Chevrolet Volt sales.

John Holt, owner of John Holt Chevrolet-Cadillac in Chickasha, Okla., also told Automotive News he has sold few Volts, but has decided to buy the tools in hopes of greater sales and future products, notably the higher-priced, extended range, Cadillac ELR, "I've heard that a lot of the non-metro dealers have opted out" of the Volt program, Holt says. "But with the new Cadillac coming, I figured I'd be foolish not to buy the damn $5,100 tool."

Approximately 400 Chevrolet dealerships do not currently carry the Volt as part of their product lineup.