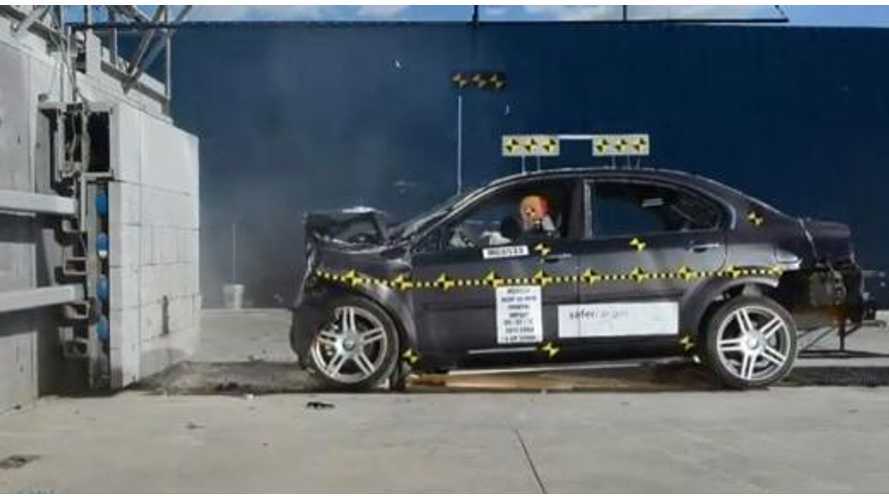 In our eyes, safety is paramount.  Why?  Well, a vehicle can only be enjoyed if it keeps its driver and passengers alive and well.  The National Highway Traffic Safety Administration recently tested the electric 2012 Coda Sedan and the Agency's results show that the Coda Sedan is reasonably safe, as long you've chosen the right seat and avoid frontal impacts.

The Coda Sedan aced the side-impact crash tests with five stars and scored perfect in the NHTSA's rollover tests, but the frontal-impact test was where the Coda Sedan earned what we'd consider a failing score of only two stars.

More specifically, the male crash-test dummy positioned in the driver's seat of the Coda didn't fare well.  It's in this behind-the-wheel position that the Coda managed only two stars.  Meanwhile, the female crash-test passenger escaped with only minor injuries.  The shotgun seat netted a four-star rating in the frontal impact test.

Though the video of the frontal impact test doesn't seem all that bad, we'd guess the damage done on the outside doesn't correlate with the injuries suffered by the unassuming driver.  Fortunately, it's not any of us in that front driver's seat.

It's our opinion that two stars in a frontal impact is simply unacceptable, especially in the driver's position since that seat must always be occupied when the vehicle is in motion.

But if you feel otherwise, then it's worth mentioning that the Coda Sedan's battery pack did not intrude into the passenger compartment during the NHTSA's tests, nor did the Agency find any indication of electrolyte spillage.  And four stars overall ain't too shabby.