Wanxiang Takes Control Of A123. Again. As It Wins Bankruptcy Auction 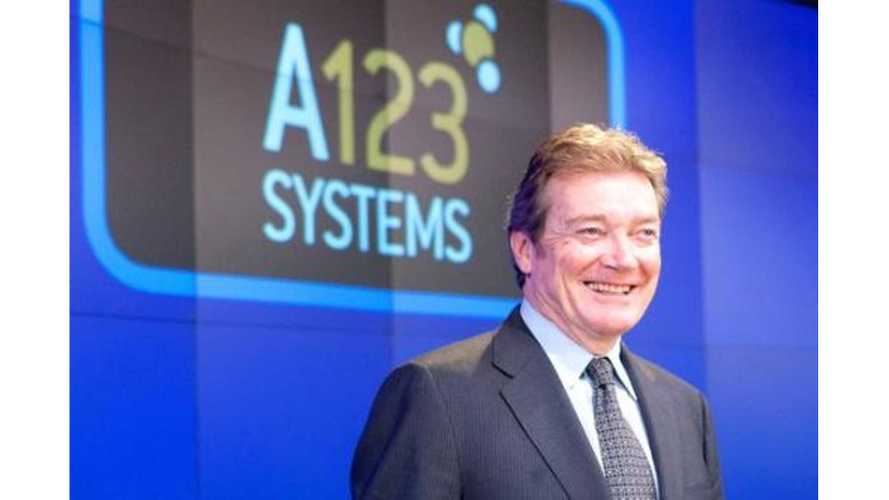 Four months ago to the day (August 8th, 2012) A123 and Wanxiang agreed to a deal that would save the US battery maker, but have the Chinese part giant take over 80% for a total commitment of about $450 million dollars.  A123 is the battery provided to the Fisker Karma and upcoming Chevrolet Spark EV.

Will A123 Prismatic Battery Modules For The Fisker Karma Return To Production? Who Knows?

Two months ago, A123 thought it could do better by not fufilling its obligations to Wanxiang and allowing itself to go bankrupt and tying itself to Johnson Controls in a $125 million dollar sale of its automotive assets and battery plants in Michigan.

A123 thought this (Chapter 11) would also be a good opportunity to break its battery supply contract with Fisker at the same time.

On breaking the deal with Wanxiang, David Vieau, CEO of A123 said, "We determined not to move forward with the previously announced Wanxiang agreement as a result of unanticipated and significant challenges to its completion.  Since disclosing the Wanxiang agreement, we have simultaneously been evaluating contingencies, and we are pleased that Johnson Controls recognizes the inherent value of our automotive technology and automotive business assets"

Unfortunately for CEO Vieau and A123, the Chapter 11 process is an open process and anyone who so chooses (after they have been approved to bid) can buy up assets by simply putting down the most money.

Now for $260 million, Wianxiang gets 100% control of the company, free of debts for $200 million less.  On a personal note, and a former shareholder, I'd like to be the first to say, nice job David Vieau.

It was Timothy Pohl of Lazard Freres who first reported Wanxiang Group Corp's bid of about $260 million bested a joint bid from Johnson Controls and NEC Corp (of Nissan LEAF battery fame) for A123.

Reportedly, the only part of A123 the Chinese part maker did not acquire (quite likely because they chose to not bid on it to avoid a political entanglement) was A123's work that involved the U.S. Defense Department.  That part of the company went to an undisclosed bidder.

The sale looks to be ratified Tuesday by U.S. Bankruptcy Judge Kevin Carey.

Because of A123's billion dollar+ relationship with Detroit motors (GM and Ford), and its decision to avoid the more sensitive parts of A123's business, the deal is expected to go through despite some protest from US politicians like U.S. Rep. Bill Huizenga (R-Mich) who has already issued a statement.

"Given the thin line between Wanxiang and the Chinese government, I am concerned about the government of China having access to sensitive technologies being used by our military forces."

Wanxiang will now assume control of battery production for the upcoming Chevrolet Spark EV, and General Motor's has already said it does not foresee any supply issues on its upcoming mini all-electric car due out in the summer of 2013.

It is still unknown when (or if) Wanxiang will seek to continue its relationship with Fisker, as that company has been forced to shutdown production of their luxury extended range Karma for over a month while A123 has been going through the bankruptcy process.  Wanxiang may elect to also ask the bankruptcy judge to void that contract under a Chapter 11 clause that allows companies to void "below market conditions".<

"We believe that A123’s industry-leading technology for vehicle electrification, grid energy storage and other industries complements Wanxiang’s strong R&D and manufacturing capabilities, so we think adding A123 to our portfolio of businesses strongly aligns with our strategy of investing in the automotive and cleantech industries in the US.

We plan to build on the engineering and manufacturing capabilities that A123 has established in the US and we are committed to making the long-term investments necessary for A123 to be successful."