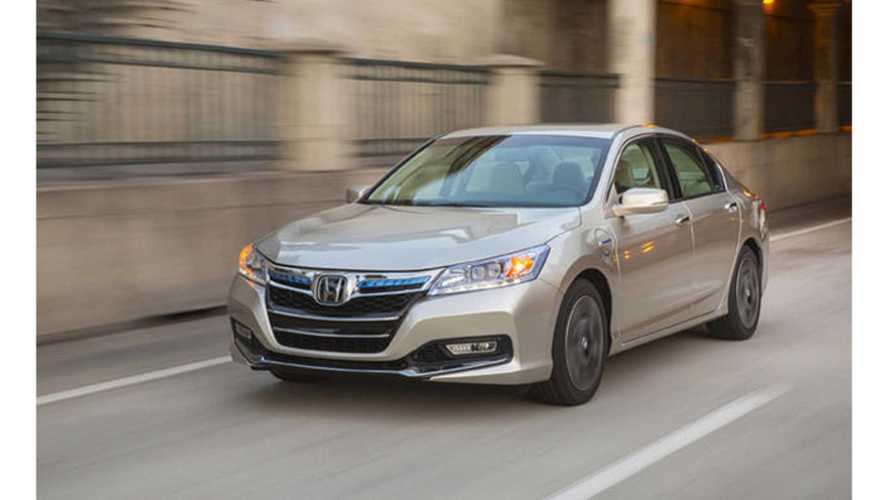 The battle of the MPGe talking points has begun.

Today, the 2014 Honda Accord plug-in hybrid was officially announced and priced at the Los Angeles Auto Show.

And if we have learned anything from listening to the press releases when it comes to plug-in hybrids, everyone who can't travel more than 38 miles on a charge wants to talk MPGe.

The good news for Honda is their plug-in hybrid is as good as it gets at 115 MPGe.

Its worth noting that the way the EPA rates MPGe discounts the true value of a greater electric range to a certain degree and puts emphasis on the extended range capabilities of a vehicle.

In the case of the Accord plug-in, when it comes to extended range mode, it is capable indeed, with a 47 city/46 highway rating and a combined score of 46 MPG.  The Honda Accord plug-in has an all electric range of approximately 13 miles; which to use a technical term is pretty meh.

Lots Of Seating Room For Three In The Rear

As a comparison, the Chevrolet Volt has a 98 MPGe rating, despite a (recently increased this year) 38 mile all electric range, primarily due to the fact its extended range drive component is not terribly efficient at a combing 37 MPG.

More directly competing against the Honda, is the new Ford Fusion Energi. That plug-in was just priced at $39,495 and achieves "more than 20 miles" of all electric range, with a overall 100 MPGe rating.

Rear Boot And Accessories Of Accord Plug-In

The Honda goes on sale January 15th in California and New York starting at $39,780.  And because it is an all new model entering the market in calendar year 2013 (albeit very early in the year),  it will be classed as a 2014.

The Accord Plug-in is also the first production car in America to meet the more stringent new LEV3/SULEV20 emissions standard, and will qualify for single-occupant carpool-lane access in California.

The more traditional, two-motor Accord Hybrid will launch nationwide next summer, with anticipated class-leading fuel economy ratings of 49/45/47 mpg (city/hwy/combined).

Honda says that unlike the unique styling of the Accord Plug-In, the Accord Hybrid will share styling much closer the conventional Accord Sedan.