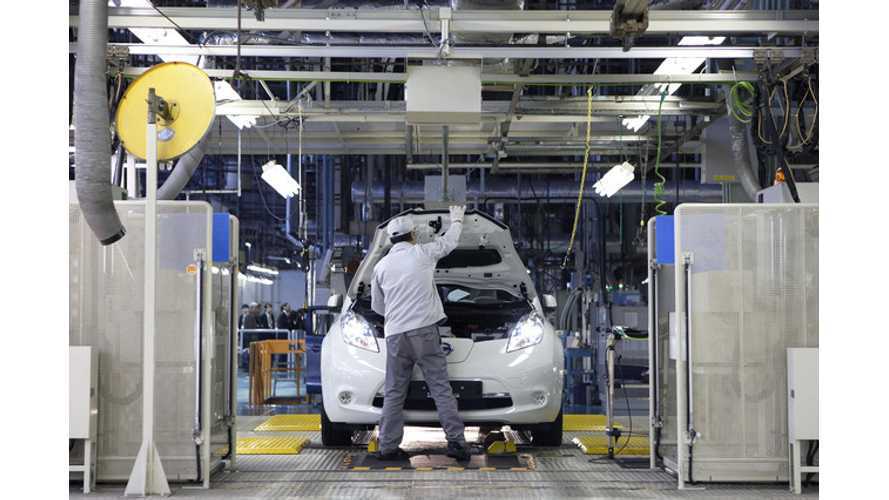 About a week ago the grand opening ceremony of Nissan’s new electric car battery plant in Smyrna was cancelled.  This led some to speculated it had something to do with the LEAF's relatively slow sales to date, or a possible hiccup in the manufacturing process.

InsideEVs got in touch with a Nissan plant representative, and we were told that it was simply a "failure to coordinate executive schedules," and that Nissan would still be showcasing the facility in the near future.

"We will come out with some info-graphics and details around the process in the next few weeks. "

They also more importantly noted that "the battery plant already is producing batteries" for the 2013 LEAF.  Which is all most people looking to buy a US-made Nissan LEAF really care about anyway.

As for the US production itself which was scheduled to begin in couple weeks in Smyrna, TN, Nissan rep Travis Parman told us, "there's been no change in the start of LEAF production in Smyrna."

Recently Nissan dropped some pretty impressive specs on the 2013 LEAF in Japan, which included an improved range (about 14% more) and a new, cheaper entry model (about 12% less). At the same time,  a bevy of new options were made available to add-on to the car; some of which included leather seats, dark colored interior, larger boot capacity, 17" wheels.

While we assume the majority of these features will hit the US model once production of the 2013 starts in Smyrna next month, in talking to us, Nissan North America seemed keen to distance itself from the mothership's PR-thunderstealing release in Japan

"Specifications for the model year ’13 Nissan LEAF in Japan were released on Nov. 20 and apply only for that model designed for the Japanese market. Information on the 2013 Nissan LEAF in the U.S. will be released closer to its on-sale date here. As with prior model year LEAFs, specifications between markets are unique. Ratings such as range differ based on the governmental testing procedures in individual markets."

Which of course leads to the ultimate question, when is the "on-sale date here" and when do we find out about the new US pricing structure?

"Pricing will be announced closer to the on-sale date, which will be in Q1 2013."

So it looks like while the US plant will soon be producing the new 2013 LEAF, we are still going to have to wait 2 or 3 months to see one in our driveway.