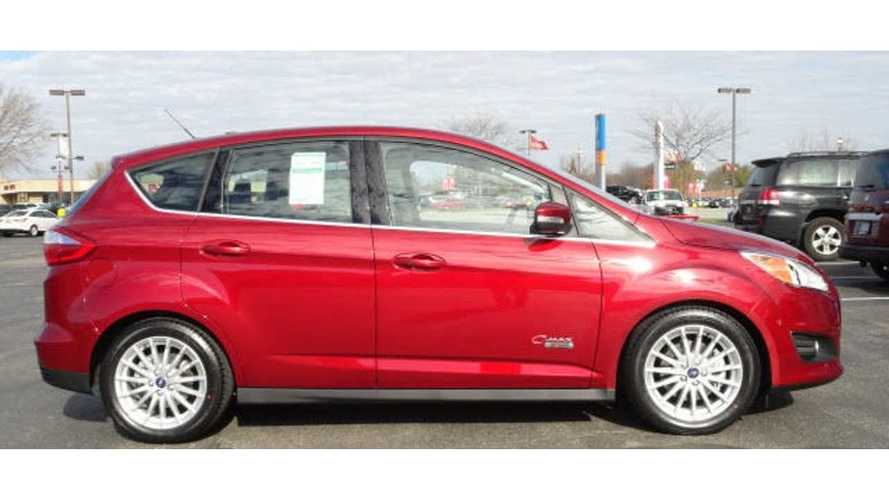 We have been anticipating being able to review this car for a very long time.   Thankfully, the first C-Max Energis are finally being delivered.

This is also one of those rare occasions where we (the media) do not receive a test car to drive months ahead of a product launch, so in many areas you can head down to your local dealer and actually test drive one for yourself.

And while I will be pulling first impression duties for InsideEVs on the plug-in Ford, my colleague Lyle Dennis will be filing a short-term report as soon as he logs a few thousand miles in his own C-Max Energi.

The Ford C-Max is powered by a combination of Ford's 2.0L direct-injected four-cylinder engine, along with a permanent magnet AC synchronous electric motor that puts out 88kW/118 at 6,000 RPMs (117 lb.-ft./240Nm), which is powered by a 7.6-kWh lithium-ion battery pack. Total system power maxes out at 188 horsepower and 129 pound-feet of torque.

The front wheel drive plug-in's top speed is 102 mph (which we did not test), with a total weight of 3,899, that portly figure is about 250lbs heavier than both the standard hybrid and the Chevrolet Volt.  The C-Max Energi also seats five with a MPGe of 108 City /92 HWY, and a all electric range (officially) of 21 miles.  Extended range fuel efficiency is rated by the EPA at a combined 43 MPG (44 city/41 highway).

This, And A Starting MSRP Under $30,000* Is The Ford C-Max Energi's Advantage Over Other Extended Range Plug-Ins

Generally one of the first things you want to establish is how the real world range holds up to the advertised specs.  Historically, just about all offerings come up a little short in this regard.

Unfortunately, it seems that those 21 EPA miles of driving electrically can be a little bit of challenge; in fact in many cases the C-Max didn't want to even start there, with the dash insisting the car had 19 miles from launch.  In the end (and refreshingly) the dash estimattions were right on the money, as the Ford returned both 18 and 19 miles of range in seperate tests.  Driver heavy-footedness could also be at play here.

In electric mode (EV Now) and in the city, the car performs well, as it has 117lb of torque ready to go at all times (not dissimilar in performance to that of the Chevy Volt).  Where things get a little dicey is on the highway.  Ford claims a top electric speed of 85 mph, and while it is true that you can get the car up to speed, it is going to take you awhile if you want to avoid the gas engine.  (The speed-o-meter is reported to be about 3 mph optimistic, so your real world top speed is more like 82).

Above 70mph (in EV Now mode-which forces the car to perform electrically), acceleration is not all that great, or the handling...perhaps due to the low-rolling resistance tires and 3,900lbs.

Simply put, if you are driving 75 mph and want to stay driving on just electricity, and you have to enter the oncoming traffic's lane to pass, you are probably going to die.

However, it is not all bad news for those of us who occasionally like to drive a little spiritedly; out of the EV Now mode you will be receiving the full benefit of the 188 hp, and with it, more than acceptable highway performance is soon returned to the C-Max.

We should note, that like its competition, the Chevrolet Volt, the transmission in the C-Max Hybrid (CVT) looks to makes high speed driving not very fun.  Driving at 75mph+ nets you a fairly harsh (and consistent) engine noise, which the tach (if you can figure out how to turn it on) confirms to be an engine at close to 5,000 rpms.

EV: Auto
The vehicle automatically takes advantage of plug-in charge.  When the charge is depleted, C-MAX Energi operates as a full hybrid.  Also, the powertrain computer automatically selects the appropriate blend of battery usage and engine usage based on demand and the state of battery charge.
EV: Now
The vehicle operates in EV mode using plug-in power. The gasoline engine will not operate unless an override setting is selected.
EV: Later
This setting saves plug-in power for later use, like transitioning from highway to lower-speed residential neighborhood use. C-MAX Energi operates in normal hybrid mode, using both gas engine and electric motor. Plug-in power is reserved until the driver switches to the EV: Now or EV: Auto setting.

While the battery is 7.6 kWh, you are going to draw about 8.1 kWh from the wall to full charge the car.  (Why are plug-in car makers not forced to report this number we will never know).

A full charge at  240v takes about 2:45, while 120v is closer to 7 hours. Because the battery is relatively small compared to fully electric cars, and half the size of the Volt's, we feel that many owners can (and probably will) skip owning a Level 2 charger at home.

Functionality is where the C-Max Energi really shines.  The car is simply the most practical extended range hybrid to get people around in, hands down.   Not even close.  There is a lot of space inside the car, which is not all that long at 174-inches.  The roofline is very tall, and the seating position is about as far away from compact passenger car as you can get.  Very upright seating positions.

Ford's 7.6 kWh Lithium Battery Takes Up A Good Bulk Of The Cargo Area In The Rear

Compared to the Volt, the performance specs of the C-Max Energi are just not quite as good (with an estimated a 0-60 time of 9 seconds).

Our impression is that the Volt's front seating area is a little more luxurious, with the C-Max getting the nod for "ease of use" on the dash instrumentation.

However, the C-Max has 5 seats, and that is a biggie.  Although my own family only consists of 3 people, I can tell you that even for me the Volt's rear passenger configuration has annoyed me on more than a few times attempting to utilize the area just for transporting everyday items that would not be an issue for a normal car.

So while we would not suggest three adults, or even two adults and a child attempt to use the back seat of the C-Max Energi for any length of time, the fact that they can in a pinch can not be undervalued.

In the back of the C-Max Energi, the large battery definitely intrudes as compared to the standard hybrid.   The rear cargo area floor, as is raised a good 8 to 10 inches.  Even still, Ford says the Energi has 19 cubic feet of luggage space.   Although looking at the dimensions its probably a good idea to not be planning on moving anything too 'tall' in the back.  With the rear seats down, total capacity expands to 43 cubic feet.

Did we mention that my colleague Lyle Dennis is trading  in his Volt for one?  We don't think this will be an isolated occurrence either.  The C-Max Energi's functionality (and five seats) can't be denied.   And other than the 5-6 minutes you might spend attempting electric driving north of 70 mph, the performance is no slouch either.

What also can't be denied is the cost.  It is the first extended range car to start at the magic number of $29,995 (including $795 delivery, but after a $3,750 federal credit), and $28,495 in California (thanks to the state's CVRP program).  We expect big things, and big sales from the C-Max Energi, and it makes us anticipate the Ford Fusion Energi in January all the more.