Nissan Says 42,700 LEAFs Sold Worldwide, Even More Committed To EVs (And Saving The World) In The Future 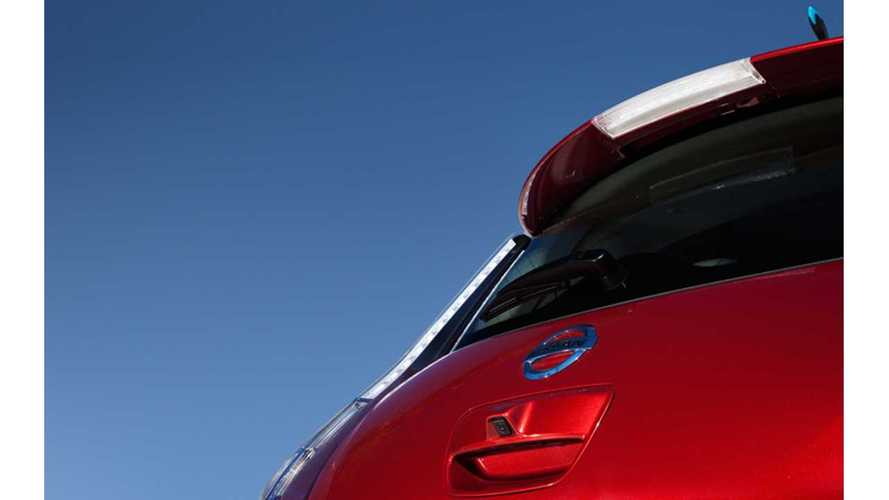 Nissan Says They Are About To Implement

During Nissan's second quarter update in Japan (video of which below),  Toshiyuki Shiga, who is Nissan's Chief Operating Officer, and the man in charge of Nissan's zero emission strategy, said the company has sold 42,700 LEAFs since the 73 mile, all-electric car went on sale almost two years ago.

The COO also took some time to discuss the progress of Nissan's EV program, and how they see the future and the company's mission to the greater good of mankind, and not just in the sales of automobiles (translated from Japanese):

"Sales volume of EV is slow---that is the media report that I read,  frankly speaking its (the report) disappointing. I am frustrated.  Nissan is becoming the leader in (the) zero emission area will help to contribute to solving the global warming and resource issues."

"Somewhere in the history of human beings, people will have to switch from fossil fuels to renewable energy.  And Nissan is assuming a risk to do it first.  We are not the first one (to make an EV), but as a mass volume EV maker, we (have) deployed electric vehicles globally for the first time."

The Nissan executive notes that there are many different situations around the world, and that can make it difficult to market electric vehicles in certain situations; but that Nissan wants to penetrate the worldwide market with zero emission vehicles now, and in so doing they are learning what it takes to sell them more efficiently in different areas.

"It will be two years next month since we launched (the LEAF), and through sales of (the LEAF) we are learning a lot of things.  For example, why customers hesitate to buy electric vehicles, and what are the issues they face after they buy them, and how they delight the customers once they get into an electric vehicle."

Nissan LEAF Production Will Expand To Smyrna (TN), Next Month

Nissan says they understand the roadblocks to electric vehicle ownership more thoroughly now, and they they are taking a "new lineup of countermeasures" to remove them.

Some of these roadblocks may be on pricing, as Nissan is moving production for international sales away from Japan, and into the USA and the UK starting next month to remove currency pricing pressure from the car.  The company as well will be offering the LEAF in a more basic, cheaper version to expand the base of customers who potenetially can afford the car, as well as adding a high-end luxury offering through Infiniti (the LE) at the end of next year for people at the other end of the spectrum.

Mr. Shiga sums up the conference call by remarking:

"So sales of Nissan LEAF...people may have different opinions to say this is too slow or too fast.  We would like to penetrate the market more.  But, I am (now) responsible for the task team that is accelerating the sales of Ev.  So the entire company is united to promote the sales, and I am leading this.  So in that sense, please don't forget that we have this passion and a sense of mission to work on EV, I hope you understand this, and look at our activities from this perspective."

Contributor's note:  Part of this story is making the rounds on the Internet saying Nissan/COO Shiga is "disappointed and frustrated" with LEAF sales, and was delivering a eulogy on EVs.  Not so.  Sadly, as the story is reprinted, few (if any) auto journalists actually took the time to listen to the webcast (about 150 views last time I checked), and have just copy and pasted a 'Cliff Notes' translation of the COO's speech from someone who did listen to it (in this case TTAC).

Unfortunately, TTAC (which is a great outlet for general automotive news) got the inference wrong thanks to some choppy translating, and probably because they were skimming for nuggets to report at the event. (Update:  TTAC was at the conference).  It happens.  Nothing intentional on TTAC's part.  At least they are digging for original content.  TTAC also said the Nissan COO's talk had the "undertones of an eulogy on the electric vehicle," which if you watch the video...he clearly does not.  If anything talking EVs is his most upbeat moment after 40 minutes of a 'nails on the chalkboard' discussion about China.

Below video:  Mr. Shiga, Nissan COO, talks about everything Nissan in a rather lengthy quarterly results conference call...but don't worry, I have watched the whole painful ordeal, and can tell you that the part that is of interest in regards to plug-ins starts at the 41:40 mark.