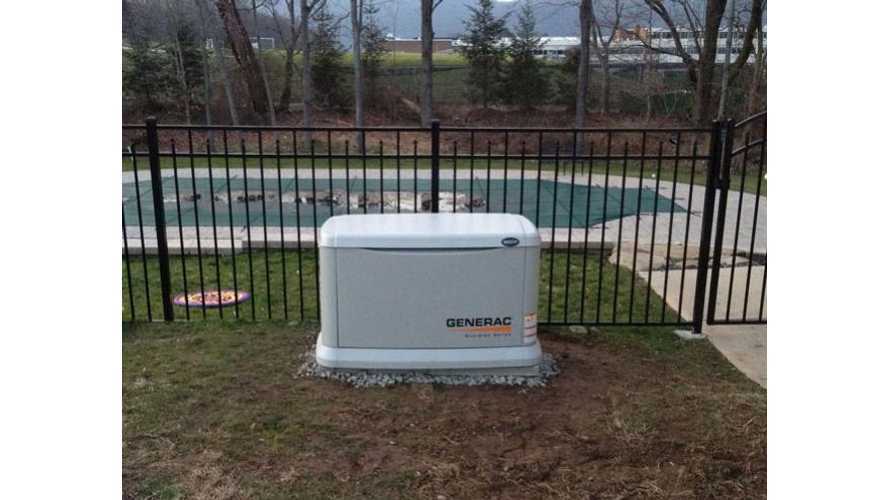 Unfortunately, being a New Yorker, I had the experience last week of being an all-EV family during the Hurricane Sandy crisis.

I say unfortunately because of the terrible losses many people in my region had to endure and are in some cases still enduring. My heart goes out to them.

For me, fortunately, there were no difficulties.  The main reason that was the case was because I had decided to install a home generator.  Last year my region was first hit by Hurricane Irene and next a freak October snowstorm.  Both of those events took out our electric power.  Being dependent on electricity for driving and not wishing to go through the inconvenience again I purchased a whole home generator last year.

We put in a 20kw standby unit made by Generac connected to the natural gas line at our home.

Last Monday the power went out in my neighborhood and ten seconds later the generator seamlessly kicked on.  It ran continuously for a total of 5 days until the power came back.  I bought a unit powerful enough that it could easily handle the loads of my home including the 3.3 kw EV charger we use for our Leaf and Volt.

This worked out particularly well because the storm also caused a gas crisis.  We've had multi-hour long waits at gas stations in a wide region around us and very limited supplies, most stations had no power, no gas or both.

So in this case the combination of a natural gas generator and an EV allowed us complete insulation from the effects of this natural disaster.

However, if we had to rely on a pure EV with no whole home generator, we would have certainly had difficulty.