Trade the Focus Electric for a Fusion Energi? 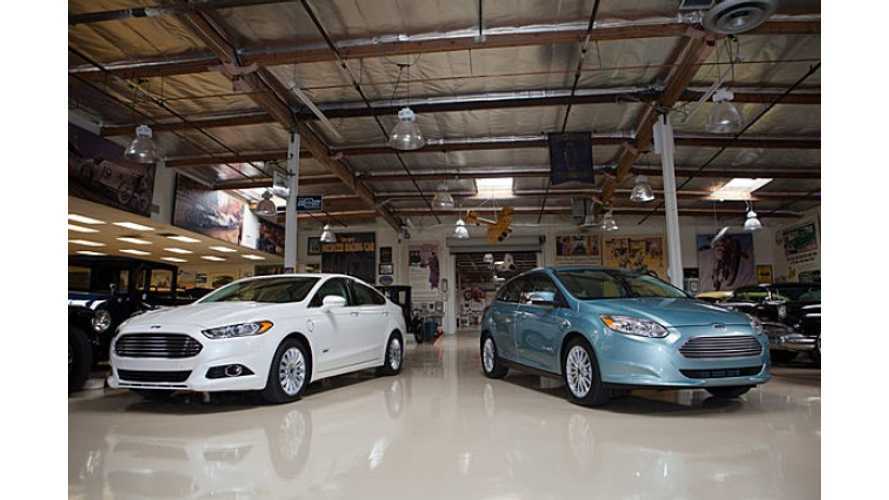 As previously reported, the 2013 Focus Electric I purchased has been periodically kicking out a “Stop Safely Now” message.  Thankfully it likes to do this while sitting in the garage at home, and not out on the road somewhere.  Power cycling would clear the message out… eventually.  A small number of other cars are experiencing this phenomenon, and for those cars solutions were found.

In my case Ford replaced a cable, to no avail, and then the HV batteries and 12v battery, and it seemed to fix it, but then the message popped up once more.  So some slide rulers from Michigan came down and installed a “black box” or as they put it a “flight recorder” so that they can have all the data from the car at the exact moment the SSN message is generated.  In fact the flight recorder actually reports back via cellular modem in real time.

Predictably, since the flight recorder was installed no SSN message.  Rather like a failing appliance that behaves perfectly when the $75/ hour repair man is standing there waiting for you to demonstrate “the problem.”

How Do You Catch an Intermittent Problem? Install a Black Box errr Cardboard Box of Course!

Shortly after the flight recorder went in, Lynn from the Ford Executive Offices contacted me, and said that Ford would like to buy my Focus Electric back and build me another car.  She offered that I could get another Focus Electric or apply that value toward another model of my choosing.  First thought, “man I wish I hadn’t just spent 8 hours clay barring and waxing that car.”  Second thought, “that Fusion Energi is one sweet looking ride.”

I mean I wasn’t Jonesing for the Fusion Energi one bit, until that phone call, and suddenly I found myself wondering "how much gas would I burn in a Fusion Energi?"  Arrangements were made with Richmond Ford to swap the Focus Electric for a standard Fusion for a weekend test ride.  The Fusion Energi is not available just yet, so I was checking out a gasser just to get a sense of the space and feel of the car.

The Fusion is a mid-size car so there is significantly more room in the passenger areas compared to the Focus Electric.  The front seats only marginally so but the back seat in the Fusion has much more room.  According to the specs, five inches more.  Sometimes the specs for passenger areas seem to have no basis in reality.  In this case the specs don’t lie.

The footprint of the trunk on the Fusion is much larger than the Focus and yet because it is a sedan, not very accessible owing to the smaller opening.  Looking it over I thought wouldn’t it be cool if the glass and trunk lid open up like on a hatch.  You could have the look of a sedan with the ease of access of a hatch.  Apparently someone at Tesla had the same thought.

The Fusion also has some gee whiz safety features like adaptive cruise control, and lane departure warning and correction, but let’s remember why we are here… electric miles.

Sedan Look With Hatchback Access? No Problem for the Tesla Model S

The 21 mile electric range of the Fusion Energi may not sound like much, but given that I have charging available at home and work, and a commute of 13.7 miles one way, it stands to reason I could stay electric much of the time.  What’s a guy to do?

Ultimately I decided to stick with the Focus Electric.  First, we have an EREV at our disposal for longer trips if need be, the Volt.  Second, thanks to its 6.6 kWh charger you can put a ton of electric miles on the Focus Electric in a day.  I’ve done 170 electric miles in one day, this simply would not be possible with Fusion’s 21 mile range and slower 3.3 kWh charger.   Even with the Volt’s larger 40 miles range, 80 to 120 miles in a day is the most you can realistically expect to do on battery.  With the Focus Electric 200-250 in a day is very doable.

Sticking with the Focus Electric also eliminates completely any cost of engine maintenance.  Of course the trade off is range limitation and range anxiety, the latter of which I received a strong dose of when I took the Fusion loaner back up to Richmond Ford to swap it back for the Focus Electric.

I’ve made this 80 mile trip in the Focus four times previously with range to spare, but on this day the weather was cold (42f) and damp so I knew the range was going to be reduced.   I kept the speed to 45 mph to compensate.  When I started out it showed me being 8 miles short on range, and at one point it showed as much as 14 miles short.  I actually started thinking where can I stop and beg some juice.

About halfway it still showed me coming up short a few miles, so I reduced from 45 mph to 40 mph for a while, and slowly the gap came down and eventually I was on the plus side, but just barely. With 10 miles to go the low battery warning popped up.  I arrived home with one mile to spare.  I wondered if it was really was that close, so I cranked the heat up to max to see how long it could go.  Not long.  Just a handful of minutes and up came “Battery Depleted, Stop Safely Now.”

When You See This You Better Be Close To Your Destination

The takeaway here is that the “fuel” gauge on the Focus Electric is very good.  Of course on a full or nearly full battery it struggles to predict how far you are going to go because there are just too many unknown variables, but as you get into the lower half of the battery it does a good job of dialing in the range, hopefully I won’t be testing its predictive powers any time soon.

If we didn't already have a Volt,  the Fusion Energi would be very tempting, but once you have a EREV in your fleet, a zero gas/zero emission vehicle like the FFE is the next logical step.