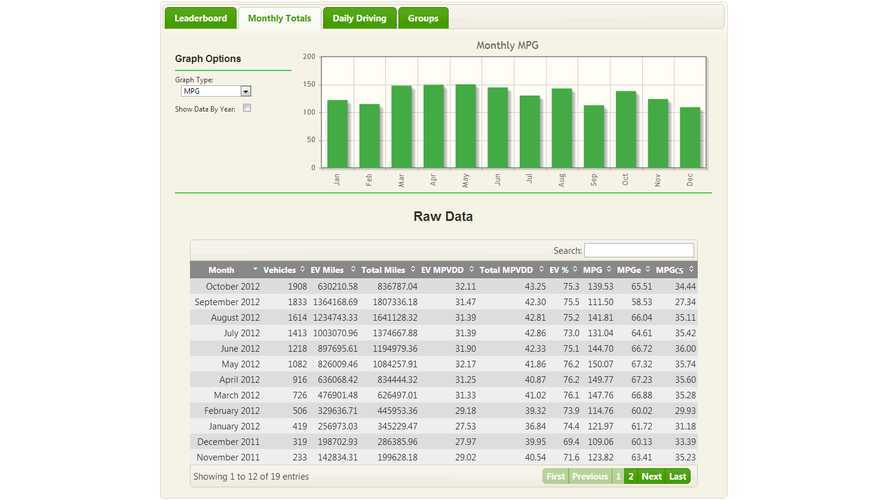 Since October 13th, Voltstats.net, a popular site for tracking efficiency statistics for the Chevrolet Volt, no longer has access to Volt data.  VoltStats.net was started by Volt owner Mike Rosack in April of 2011, and is not affiliated with GM.  It allows Volt owners to voluntarily sign up to have their Volt's mileage and efficiency statistics tracked online, and viewable to anyone who visits the site.  This is done by providing their OnStar RemoteLink credentials to VoltStats. Data can only be read, since a four digit key code is required to send the vehicle other commands, which VoltStats.net does not collect.  Vehicles are only identified by the last 6 digits of a person's vehicle identification number, as well as an optional nickname for their Volt.  Volt owners can earn trophies on the site for feats such as the longest distance traveled without using gasoline, number of miles on a single tank of gasoline, and number of electric miles driven in a day.

There are a few statistics that cannot be tracked by VoltStats.net, such as what it feels like to experience a silent ride with instant torque and no shifting of gears.  However, that can all be answered with a test drive, chatting with a current Volt owner, or realizing that the Volt ranks the highest in owner satisfaction of surveys conducted by both Consumer Reports and J.D. Power & Associates.

As of this month, VoltStats.net has over 1900 Volt owners signed up to have their vehicle data tracked, or a little less than 10% of all Volts sold thus far.  This is more than enough vehicles to obtain statistically relevant data about the entire Volt "fleet" and, so far, the numbers are impressive: all Volts signed up have driven an average of 129 miles for every 1 gallon of gasoline that has been used.  Furthermore, over 70% of the mileage put on these Volts have  been using grid electricity.  These impressive numbers have been referenced by many people to show how successful the Volt-concept really is at reducing gasoline usage and meeting the majority of commuting needs with grid electricity.

VoltStats.net is arguably one of the best marketing tools that GM has for would-be buyers of the Volt to prove how great the car is for reducing gasoline use and operating primarily on grid electricity.  So, why in the world would GM want to prevent VoltStats.net from continuing this free marketing for them?  I emailed Mike Rosack, the creator of VoltStats.net, to see what information he has been told:

VoltStats.net recently stopped displaying new data.  Why did this happen?

I've never been an official partner of GM or Onstar, but they knew about my site and had no problems with the usage until recently.  On Saturday, October 13th, GM contacted me to inform me that they had to shut down access to the credentials I was using to pull data from Onstar, citing vague security concerns.

How did the API get disabled?  Did they just tell you to stop querying everyone's cars, or did they somehow block those queries?

They blocked the service credentials I was using to authenticate - the current version of the RemoteLink app uses different credentials.  However, it's fairly clear that I'm not supposed to try and get Volt Stats back up and running without their blessing.

Does GM realize the significance of the data that VoltStats.net provides to its potential consumer base as well as naysayers on the technology?

I think so.  They were very clear when they notified me last Saturday that they realized the service was important to a lot of Volt owners, and that they were looking to get the site up and running again as quickly as possible.  I think it's been a great asset to GM and the Volt - I've heard from many owners who said it helped them make up their mind to purchase a Volt.

Does GM intend to allow access to the data for VoltStats again in the future?

Is there an estimate as to when the data may be back online?

If you had asked me last Saturday, I would have said early this week, but that obviously wasn't the case.  At this point in time I really have no idea when service will be restored - it could be Monday, it could be a couple of weeks.

So for now, the most comprehensive public dataset of Volts on the road today continues to be devoid of data updates from OnStar.  As one of many Volt owners, I hope GM is able to restore VoltStats.net site access quickly, for their own benefit, as well as for all the Volt owners that have signed up for the service.  It is an amazing treasure trove of data for current Volt owners, and also helps prove that a 40-mile extended range electric vehicle can significantly reduce gasoline usage while providing limitless range.