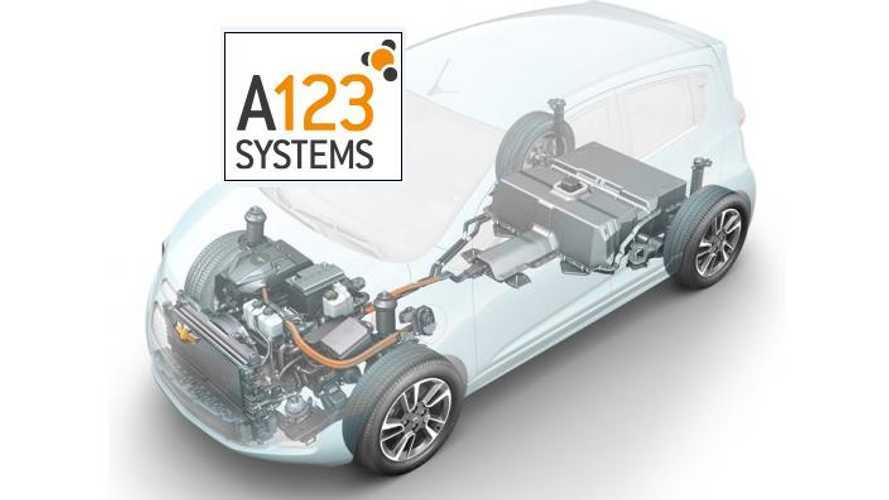 Battery maker A123 last night filed an SEC report stating that it expects to be in default under material debt agreements today.   And as such, today A123 and its U.S. subsidiaries filed for reorganization under Chapter 11 of the U.S. Bankruptcy Code in the District of Delaware.

The exact source of the problem was that A123 did not make an interest payment due yesterday on $143.8 million of notes that expire in 2016, or make a payment (also due yesterday) on $2.76 million in outstanding 6 % notes.

“The company may not have sufficient cash to fund operations and may need to seek the protections provided under the U.S. Bankruptcy Code,” A123 said last night. “No assurance can be given that the company will be able to avoid restructuring, reorganization, or a bankruptcy filing.”

Previously, in a deal worth upwards of $465 million,  A123 had announced a financing deal with the Wanxiang Group Corp., which is China’s largest auto-parts maker, for a majority ownership stake in the company.  However, in yesterday’s 8-K filing, A123 said it was considering strategic alternatives to address its liquidity problems, and today, A123 announced the Wanxiang deal has fallen through.

"We determined not to move forward with the previously announced Wanxiang agreement as a result of unanticipated and significant challenges to its completion.  Since disclosing the Wanxiang agreement, we have simultaneously been evaluating contingencies, and we are pleased that Johnson Controls recognizes the inherent value of our automotive technology and automotive business assets"  - David Vieau, Chief Executive Officer of A123

It looks as if while A123 will go on in some (smaller) form, its current shareholders will not.  A123 is the current supplier of batteries for the Fisker Karma, as well as the future supplier for the Spark EV.

Update: A123 has signed a deal (subject to bankruptcy) worth $125 million to Johnson Controls, ($73 million of which to fund the company's continued operations in the meantime) for its automotive technology, products and customer contracts, as well as ownership in its facilities in Livonia and Romulus, Mich.

Also included in the agreement is A123's equity interest in Shanghai Advanced Traction Battery Systems Co.  A123 says it continues to explore "strategic alternatives" for its grid, commercial, government and other operations.

"On October 16, 2012, A123 Systems, Inc. announced that it has entered into an asset purchase agreement with Johnson Controls, Inc., which plans to acquire A123’s automotive business assets, including all of its automotive technology, products and customer contracts, its facilities in Livonia and Romulus, Mich., its cathode powder manufacturing facilities in China, and A123's equity interest in Shanghai Advanced Traction Battery Systems Co., Alpha’s joint venture with Shanghai Automotive. The asset purchase agreement also includes provisions through which Johnson Controls intends to license back to A123 certain technology for its grid, commercial and government businesses. A123 also continues to engage in active discussions regarding strategic alternatives for its grid, commercial, government and other operations, and has received several indications of interest for these businesses.

To facilitate the transaction process, A123 and all of its U.S. subsidiaries have filed voluntary petitions for reorganization under Chapter 11 of the U.S. Bankruptcy Code in the U.S. Bankruptcy Court for the District of Delaware. A123’s non-U.S. subsidiaries were not included in the filing. This action is expected to allow A123 to provide for an orderly sale of its automotive business assets and all other assets and business units under Section 363 of the Bankruptcy Code and help maximize the value of its assets for its stakeholders.

In conjunction with the proposed asset purchase agreement, A123 has received a commitment from Johnson Controls for $72.5 million in debtor in possession financing to support A123’s continued operations during the pendency of the sale process."

All of this makes for an interesting talking point for tonight's Presidential debate.  At time of press, A123 shares are lower by about 75% at 6 cents (real time quote here)