I am the High Voltage Battery Killer 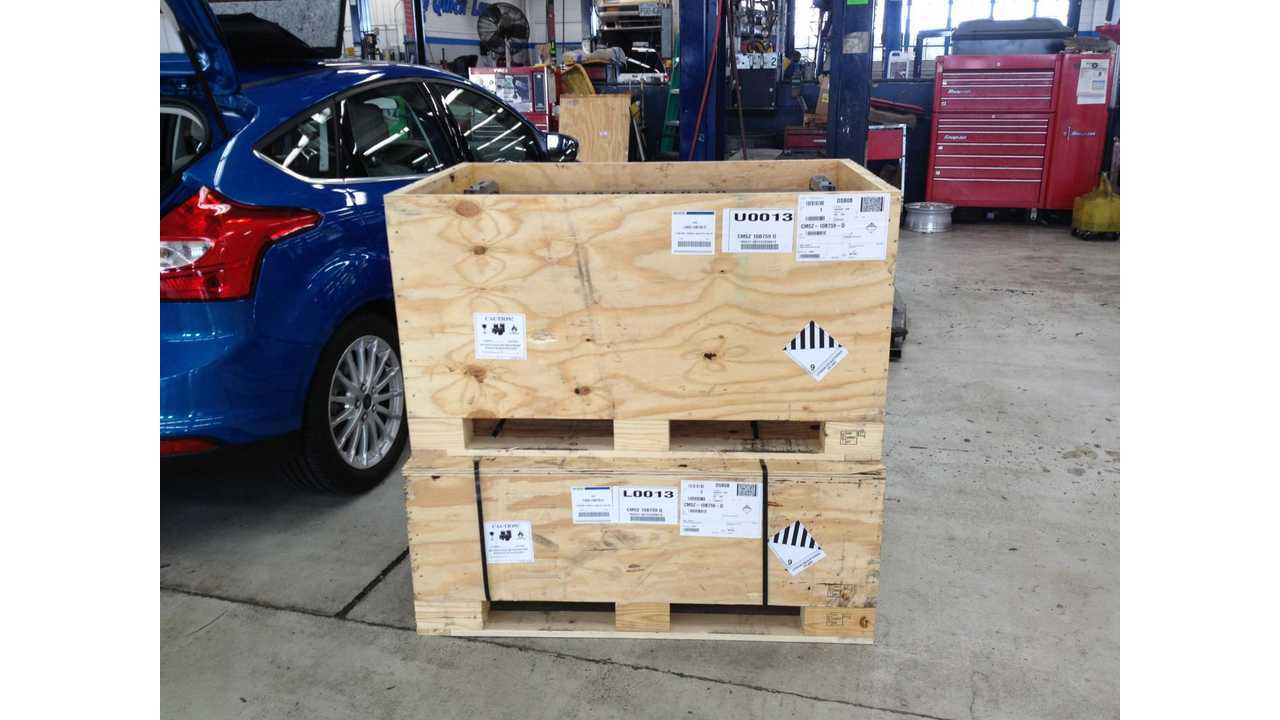 About two weeks into ownership of our Ford Focus Electric I asked the wife to take the Focus Electric to work because I needed to pick up a manhole cover and it would be easier to get it into and out of the Volt.  Yes my day job is that glamorous.

This would be her first time to drive the FFE, so of course when she hopped in and pressed the power button it didn’t start.  It came up with a “Stop Safely Now” which seemed odd since we weren’t even moving yet.  I had read that some owners had experienced this issue, and had managed to clear it by power cycling the vehicle.

Now you have to understand that my wife was not exactly enthusiastic about the FFE in the first place.  Electric vehicle with a backup engine was an idea she could cotton to, but battery only… not so much.  Having attempted to power cycle three times and still no joy, she stepped out of the car announcing “done with that car.”

This is not a message you want to see from your 2 week old car.

Of course when I plunked down in the driver’s seat and pressed the power button it gave the “ready to drive” icon right away.  In retrospect, her opening the door was probably the magic ingredient that was missing because like many cars today, the FFE doesn’t fully power down until you do that.  I drove the car for a number of days after that without incident, but one morning it gave me the “stop safely now” as I was backing out of the garage and I decided I better stop rolling the dice and get the thing looked at.

What ensued was something of an eye opener.  I was concerned about having the vehicle towed, it being electric and only two weeks old.  Thus my thought was to drive it to the nearest dealer.  Calling said dealer, they informed me it would be next week before they could even look at it, and I would have to figure out my own transportation.  This was something of a shock because when I had an issue with my Volt, I called my Volt Advisor and they arranged everything with the dealer, including a loaner car to drive.  There was none of this next week business, instead it was "what time tomorrow morning would you like to bring it in?"

Then I called the originating dealer Richmond Ford and though they wanted to be helpful it was pretty much the same story.  You are outside the 35 miles… if you can drive it up here… not sure we can help with a loaner.  Yikes.

Hoping it would turn out to be a minor issue I decided to tow to the closest dealer, Bowditch Ford, and though they said it would be next week before they could look at it, they called the next day and said it was beyond their ability to fix as they were not yet fully EV certified.  What came next was something of a circus of phone calls to Bowditch to Richmond Ford to Ford Roadside Assistance, the Roadside Assistance Dispatch, and the Tow Truck driver.

The first tow truck driver they sent went to pick it up and when he found how far it was going, he refused the job.  In hindsight I can laugh about this, but you can imagine I was less than amused at the time.  The highlight of the phone calling extravaganza was when the second tow truck driver called me up to explain that despite arguing with Bowditch for half an hour they refused to turn the car over to him because he had a tow dolly and not a rollback.  Rest assured he told me, he was going back up in the morning to argue some more.  I had to admire his gumption.

At some point, the corporate run around ended.  I knew this when I called into Ford Roadside Assistance and suddenly there was a new menu option, “if you are calling about an Electric Vehicle press 3.”  To whomever at Ford or Richmond Ford made this happen, I thank you a thousand times. Truly was not looking forward to going through the whole spiel about the car again.

From that point on the service was exceptional.  All arrangements for transporting the car were handled for me, and most importantly going forward there would be only one central contact at Richmond Ford, Kent Shockey, which made communicating about the car much easier.  Richmond Ford also drove a loaner car to my house, a brand spanking new Focus Sedan.  I almost felt guilty.

That guilt was tempered by the FFE spending 3 weeks being repaired.  At first they replaced some cables, but the cables ultimately did not solve the issue, and so they replaced the High Voltage batteries, which took some time to bring into the dealer, and once there a full eight hours to swap out.  Apparently Ford does not yet have guide lines on this procedure so it was left to the Service Tech to charge what he felt was appropriate.  Thank the good lord we are still under warranty.

I should divulge that we also had to have the HV batteries replaced on the Volt, although in that case it was not so much to fix a problem as it was the desire of GM engineers to have a real world specimen to examine.   This clearly indicates to me that any manufacturer wanting to put their battery to a real world test should send their BEV my way.  Um yeah, I am looking at you Tesla.

The exact nature of the problem with the FFE was a Battery Energy Control Module failing to communicate,  which prevented the bottom HV battery from engaging.  I suspect this module could have been replaced, but being early days perhaps Ford wanted to have a look see to determine exactly what was going on, or perhaps they thought, instead of mucking about in the battery, best to just replace the whole works.

When the car was finally "finished" it drove home from Richmond without event, but charging it up triggered a charging fault, and eventually a yellow wrench icon with the message “See Owner’s Manual.”  This is not want you want to see after your car has just spent the past three weeks sitting at the dealer.

This time Ford arranged for Devon West, the DC District Field Service Engineer to meet me at the closest dealer.  In short order he retrieved the codes from the car and I was on my way.  Within the hour Devon called with a solution and offered to drive to my place of work where he fixed the problem on the spot.  It was half a gallon low on coolant.  He hooked up a laptop to the OBD.  Then he used a program which induced the three coolant system pumps to run and helped purge air from the system, which undoubtedly entered the system when the HV batteries were replaced.

The OBD Port is Conveniently Placed and Labeled

Opening the Cover Reveals This Port... No Word Yet on the Availability of FocusScan

There was an important take away from this low coolant level situation.  For those who wonder if liquid cooling is necessary in a temperate place like Virginia.  The ambient temperature was around 80f when I was trying to charge the vehicle.  It appears that a high temperature in the batteries induced the in vehicle charger to shut down.  So no, you need don’t live in Arizona to need liquid heating and cooling for your HV battery.  Indeed the coolant system has been heard running even on days in the 70s when charging immediately after driving.

Ironing out situations like this BECM fault is certainly one reason Ford chose a go slow approach.  Despite this issue, I still rate the Focus an excellent vehicle.  The shame is that it appears that Ford only intends to build the FFE if someone orders it, which will certainly put a damper on sales.  Some people like having an “exclusive” vehicle.  That is not me.  I want a car that is sold by the millions because I like to keep my cars a long time and I want parts to be readily available and cheap.  Fortunately such will be the  case for all the chassis parts since they are identical to the gasser parts.  Thus, it only becomes a question of how durable will the powertrain components prove.  My experience with electrical equipment is that if it makes it through the first year it will last a long time.

On an MSRP basis the FFE is about $2k more than the LEAF SL, but of course the reality is that LEAFs are now selling substantially below MSRP, and leasing for the crazy low price of $219 in some markets.  And with Smyrna set to come on line the LEAF pricing is expected to go even lower.

In fact, ran into a LEAF owner in Richmond, who happens to work for a Nissan dealer.  They gave him a $279 lease rate with no money down and agreed to allow him to charge the car at work for free.  His trade in car was costing him $350 a month just in gas!

A LEAF and FFE Charging At The Science Museum of VA...the EVSEs Once Free, Now Charge 75 cents per hour

With the robust sales of PHEVs like the Volt and the plug-in Prius and modest sales of battery only vehicles like the LEAF, Focus Electric, Model S, and iMiev, Ford is perhaps justified in taking a conservative approach with the FFE.  In time, I believe many of these PHEV will realize that the statistics don’t lie, 80% of us drive less than 40 miles per day and therefore not every vehicle in your fleet needs to have an engine.

When you have a vehicle that has this much new technology in it, it perhaps to be expected problems will show up, especially in the early going.  All that one can expect is that Ford and its dealers will do what they can to mitigate the inconvenience and it appears that Ford is putting measures in place to help with that, and undoubtedly they are learning how to refine the process and avoid these issues altogether going forward.  Hopefully, all Ford dealers will adopt the same "full service" approach that I experienced while dealing with this issue because as the Prius has demonstrated the early bird certainly can get the worm when it comes to establishing a reputation in a ground breaking vehicle category.