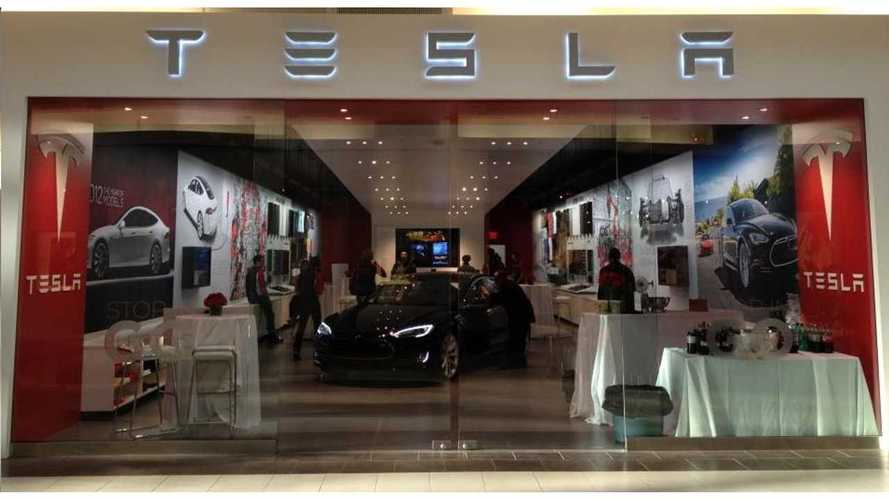 Tesla won a battle of sorts against the Massachusetts State Automobile Dealers Association (and several other concerned Natick dealerships), who were not pleased that the company had filed for a Class 1 license last May to sell cars in a mall outlet in the state.

After a protracted battle with the town and the association's lawyer, Tesla opened its 26th "dealership" in the city of about 30,000 today...although it can't legally sell any cars at the location

Tesla initially had been approved as a full dealerhips at the mall-boutique outlet, but that was before scott Silverman, an attorney representing the Massachusetts State Automobile Dealers Association got involed.

At the time, Mr. Silverman said it wasn't clear if Tesla met license requirements; specifically, Tesla had to have a service center near the Natick Mall outlet.  Tesla said it had leased a property to house a service center is nearby Waterton, but Silverman argued that at 15 miles away, and located in another city, that was not good enough.

“All that this location can do is accept a reservation for a car to be built-to-order at a later date,” Tesla said in a letter. “The actual binding contract between the customer and the company does not occur at this location but occurs later in the process when the car is ready for final production.”

In prior actions, and regardless of the outcome, Tesla said the Natick mall outlook would showcase the cars even if they did not have the ability to physically sell them there or not.

Today, as Tesla made good on that promise,  George Blankenship, a Tesla Motors VP craftily mugged for the media, "What I really want to do is inform you about our car" he said, as he showed an interactive touch-screen display on a new Tesla Model S.

Mr. Blankenship also noted that the area around the Natick Mall was "an affluent, educated area," and that was also a common profile amongst the company's 12,000 (actually 13,000) reservation holders.

Unable to stop Tesla from opening a display-only boutique, Scott Silverman now says the association has no issues with Tesla running a display at the mall.

"They did not satisfy the requirements to act as a car dealer or sell cars from the mall.  "My understanding and expectation is all they’re doing is displaying cars."

After seeing the car, if customers are interested in purchasing the new Model S, or reserving an upcoming Model X, they are directly to the internet, where the company currently accepts $5,000 reservations.  Final financing and delivery arrangements are made later, and not at the Natick location.

It is interesting to note, in promoting the opening of the boutique, Tesla said the following on their Facebook page (without noting the distinction between display showroom and dealership):

Much like how the internet has transformed the monopolistic hold Realtors had on consumer's ability to buy and sell a house, this is seen as the "first chink in the armor"of  the traditional way of buying cars.