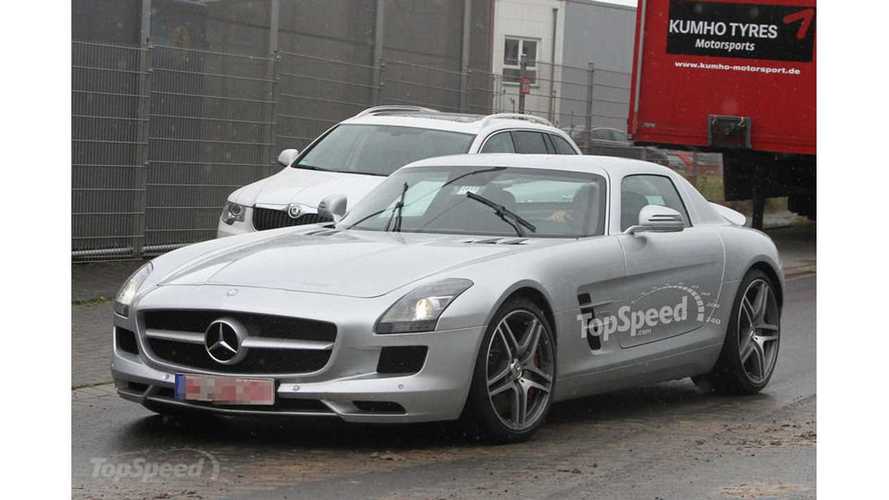 At the end of this month, Mercedes will debut the production version of its SLS AMG E-Cell at the Paris motor show.  And the pricetag is expected be about double the standard SLS AMG coupe, making the E-Cell worth about £300,000 ($485,000 USD)

So what does a cool half million get you in a electric supercar these days?  About a 100 miles.

Seen as the competition for the upcoming Audi R8 E-tron (and eventually the BMW i8), the car is expected to have a total output of 525 hp, and 649 pounds-feet of torque.

Given that torque is available from the word go, we are guessing there is going to be some AMG neck braces being handed out to would be tire kickers.   AMG is expecting that this raw power translates in a 0-60 mph time of just under 4 seconds, and a 0-125 mph time of 11 seconds.

Reports on the battery size still vary, as the original concept had a 48 kWh lithium pack on board, which was good for about 90 miles of range, a figure AMG says will improve in the production version.

Estimates on the production car's pack size is around 60 kWh.  To preserve range, the SLS AMG E-Cell will be limited to 155 mph (those folks at AMG are always looking out for the consumer).

Ola Kallenius, who runs the show at AMG has said the first cars will be sold to the public at the start of 2013.  Just this week the prototype SLS AMG E-Cell has been spotted for the first time by several media outlets testing on German roads, and at the Nürburgring circuit.

We Like The Cutaway Of The Concept SLS AMG E- Cell, But Not The Color