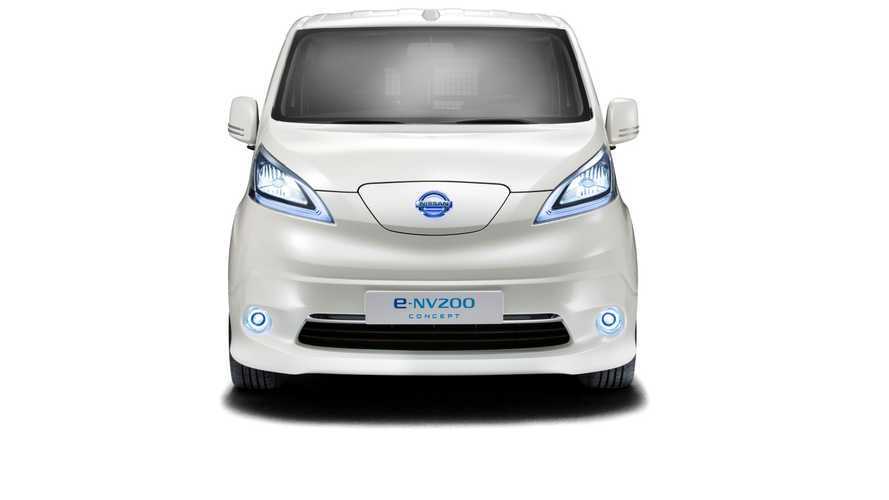 Between the writing staff here at InsideEVs, we have tested a lot of electric vehicles.  A lot.  And we are excited about this one.

To be fair, we are not sure if it is just the fact this electric vehicle is 'not a car,' or that fact it can double as a really good, fast charging, commercial van, as well as a passenger van that has us unreasonably excited about its arrival.

The e-NV200 will be the second of four electric vehicles announced by Nissan to actually reach mass production.

The e-NV200 combines the advanced powertrain of the 100% electric Nissan LEAF with the size, versatility, and practicality of the petrol based NV200 multi-purpose compact van.

While world premiering the panel van iteration of the e-NV200 at the Hanover Motor Show, Nissan said the electric van has successfully completed prototype testing around the world.  Nissan had test fleets in operation with FedEX and AEON in Japan, British Gas in London.  The company is now officially putting it into production in 2013.

As well as delivering a range and performance  comparable to Nissan LEAF, it means e-NV200 operators will be able to recharge the battery of their vans to 80 per cent capacity in just 30 minutes thanks to its Quick Charge capability.  This ensures minimal down time, which is essential for a working vehicle. It will also be much cheaper to operate with lower fuel costs and reduced regular maintenance.

Like the very expensive EREV work trucks from VIA (VTRUX Silverado) and Quantum (F150 PHEV) the e-NV200 is able to harness the energy stored in its battery to power electric tools and equipment up to 6,000W, but at less than half the MSRP price.  Nissan states that "a suitably equipped e-NV200 could, for example, become a mobile restaurant at outdoor events, a mobile workshop, etc."

The 24 kWh compact battery is housed under the load space floor, which also helps to lower the vehicle's center of gravity, while giving the utility van all of the "class leading load volume" (4.2 cu m) of the standard petrol model.  Real world electric range is estimated at 70 miles.

"The arrival of a practical and, more to the point, realistic zero-emission delivery vehicle will not only improve the quality of urban life but thanks to low running costs will also help ease the economic burdens placed on companies," said Nissan Corporate Vice President Hideto Murakami, head of the Global LCV Business Unit.

Now We Are Talking About Some Usable Space In An EV

Production will begin out of Barcelona Spain, likely in the spring of 2013 and will be sold in all of Nissan's major markets.

Pricing has not yet been announced, but Nissan has dropped hints like nobody's business that leads us to believe the panel van you see here today (and will be near identical in production trim according to the company) will sticker at about $35,000 for the 1 row business van model.  Two other models will also be available; a 2 row combi, and a conventional 2 row/5 person variant.

On a personal note, and retaining a conventional business delivery van myself that chews up about $700 worth of gas every month, this vehicle can't come soon enough.  I don't even care that it retains all the questionable "eye of the beholder" looks from its LEAF roots.  I just want to stop buying gas.

It is for that reason (fiscal common sense), that we feel the Nissan e-NV200 is one of the best new plug-in offerings for 2013, and are excited to see it delivering both packages and people on North American roads next year.   Hopefully its success paves the way to more "non car" electric vehicle applications in the future.