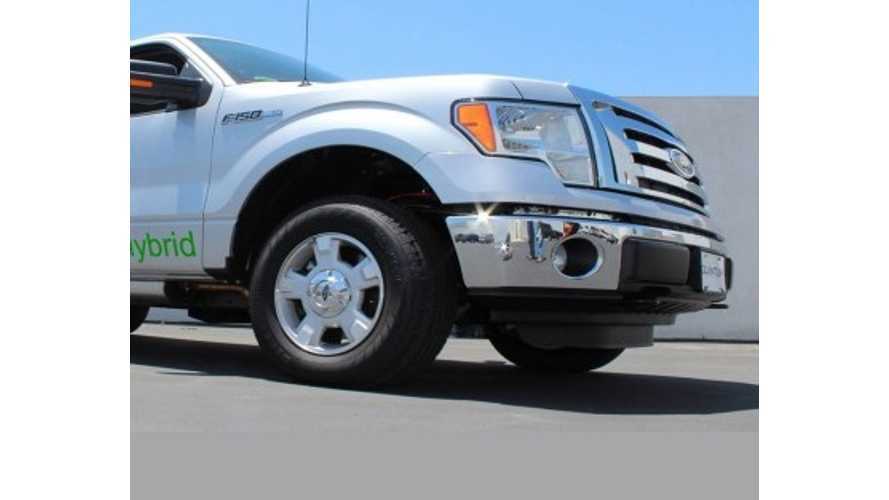 Chevrolet has VIA Motors to thank for converting its Silverado lineup into 40 mile extended range plug-in hybrids (called the VTRUX) , and Ford has Quantum Fuel Systems Technologies on their side.

There is both a show vehicle for viewing inside and a test vehicle outside the conference available for test drives.

"We are pleased to demonstrate Quantum's pilot PHEV F-150 vehicles at the HTUF Conference for the fleet managers to experience firsthand the performance and versatility of our highly efficient electric drive system which we plan to launch into production in June of 2013," said Brian Olson, the CEO of Quantum. "The PHEV F-150 is an ideal solution for fleet managers who want to substantially lower their operating costs, while also reducing greenhouse gas emissions and meeting corporate sustainability goals."

The Ford PHEV F-150, is a parallel drive system with all electric operation capability, and is capable of driving on pure electricity for the first 35 miles before shifting into hybrid mode.  The petrol range of the truck is about 600 miles.

Clearly being sold as a work truck, the plug-in F150 incorporates both 110 and 240V power outlets, allowing up to 30kWh of off-board power for emergencies or for operating tools.

As with most plug-ins with large on board batteries, the PHEV F-150 qualifies for many federal, state and local incentives including California's HVIP program -- $8,000 for the first two trucks and $6,000 per truck afterwards, along with the federal tax rebate of $7,500

Quantum has shown they are serious about building and selling these trucks, having recently delivered its first plug-in Ford to the Florida Power & Light Company at the end of May.
Like Via with the VTRUX, obtaining exact pricing information on the electric F150 has proven to be somewhat difficult, but we feel that something similar to Via's estimate of an"anticipated selling price of $79,000 in volume" would also net you the PHEV F 150.
(Quantum Tech Press Release)