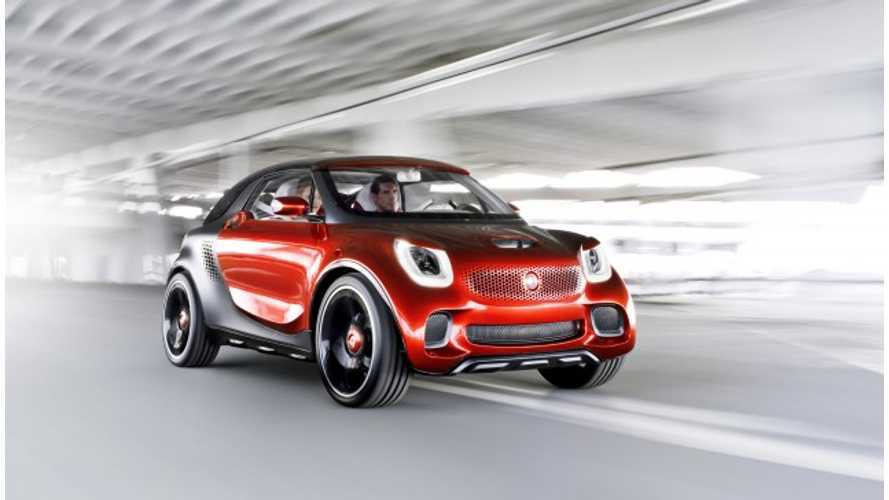 No, It Is Not A MINI Cooper

At first look, someone might take the Smart ForStars Concept as a radical Mini Cooper, however this ‘sports utility coupe’ is the latest vehicle from Smart, which is owned and operated by Mercedes Benz.

This electric concept is the closest look the public has seen about the next generation of ForTwo and ForFour minicars that are scheduled to be manufactured for the 2014 model year.

Not night vision... that is an integrated video projector

While sizing the ForStars Concept with the current Smart ForTwo, the vehicle is larger and wider in almost every dimension: length is 33.7 inches longer and the width is 5.9 inches wider. No specific word on height.

Daimler states that its name is a tongue-in-cheek reference to "the glass roof above the passengers that gives a clear view of the starry sky".

You might notice that it also feaures a video projector at the front of the car.  Not exaclty a standard option at your local dealership, and underlines the little electric car's concept status.

At the same time it hints at the witty idea of integrating a video projector in the front bonnet. This enables the work of film stars to be spontaneously shared with friends at any time.

Compared to the production model of the smart electric drive (now availabe for purchase in Canada starting at $26,990) the output of the magneto-electric motor has been increased to 60 kW (80hp), giving the smart forstars agile and lively performance.
With "135 Newton meters of torque it boasts powerful, lag-free acceleration and can overtake other vehicles with the greatest of ease." The vehicle has a top speed of more than 130 km/h (81 miles)and the lithium-ion battery has a capacity of 17.6 kWh.

Hrm, Any Clues From The SMART ForStars' Interior That This Might Be A Concept? (Click To Enlarge)

The reason the ForStars has been called a “sports utility coupe” is due to its larger size, amount of storage space, and the rear tailgate which is typically found on a crossover. To keep up with the open air feel of the Smart ForTwo, the roof and tail gate are made of glass.

Smart chief Dr Annette Winkler says: "The smart is Europe's most inexpensive series-produced electric car. Not only is it emission-free and fast, it is also possible to conveniently set the perfect interior temperature in advance with a smartphone, and it is simple to charge at a domestic socket. What's more, with its powerful battery and integrated projector the smart forstars can transform any grey backyard into an animated open-air cinema."