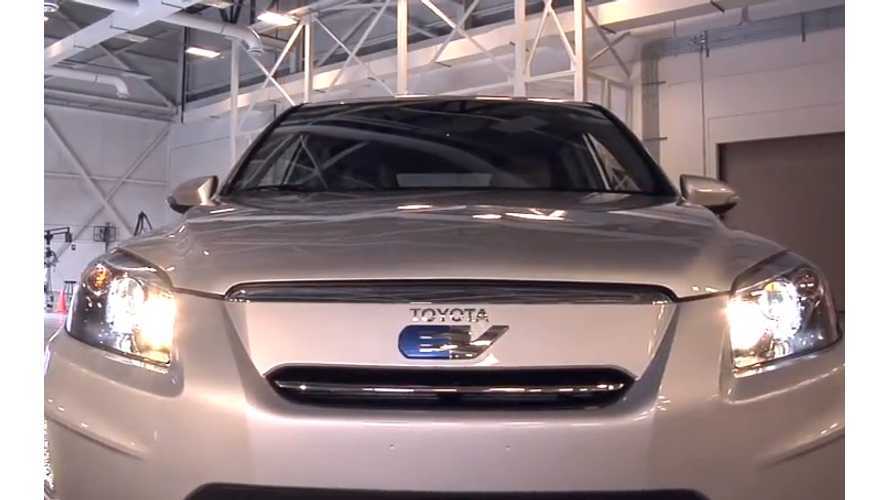 Toyota announced today its all electric RAV4 EV will go on sale Monday, September 24th, and it has been officially rated by the EPA to have a range of 103 miles.

Only 44 Hours To Full Charge From A Typical Household Outlet

Also the electric SUV received a 76 combined MPGe rating (78 city/74 highway), much lower than the other electric players in the market, but this was expected due to the size of the vehicle, its large electric motor, and relatively non-aerodynamic features.

Thankfully, 41.8 kWh of lithium battery pack can more than make up for this disadvantage, giving the RAV4 EV the longest range of anything at (or below) its price range.

Toyota's suggested retail price has not changed from earlier estimates at $49,800, but Toyota has offered some attractive financing/leasing options to soften the sticker shock:

"Special purchase financing of 1.9 percent APR is available for qualified customers, as well as a 36 month lease option at $599 per month with $3,499 drive off. Sales volume is planned for approximately 2,600 units through 2014."

Sales will first take place at select Californian dealers, with a focus on "major metropolitan markets."  Clearly, given the statement that Toyota will be selling the electric-ute into 2014, they are in no rush to sell them, so any future deals or improved incentives will be non-existent.

If you do plan to purchase the RAV4 EV, it is expected to qualify for the  $2,500 rebate through the CVRP program (Clean Vehicle Rebate Program) in California, and also qualifies for the $7,500 Federal Tax Credit.

Like other full electric vehicles that have come before it (LEAF, i-MiEV, Model S), the Toyota RAV4 EV qualifies for the California High Occupancy Vehicle (HOV) white sticker program.

In addition to 103 miles of range, the RAV4 EV can sprint to 60 mph from a standstill in about 7 seconds while boasting 73 cu ft of cargo space.   The motor in the RAV4 EV can deliver 154 hp and 273 ft.-lbs of torque to the front wheels.

As for charging, you are going to need some meatier equipment than just plugging into a 120v wall outlet with a 41.8 kWh battery pack:

Just how long does it take to do a full charge from a standard outlet?  Toyota quotes a time of 44 hours.   Ouch.

The next generation of Toyota RAV4 is due out as a model year 2015, and Toyota has hinted it may offer an all electric version that is less of a CARB compliance offering and more of a mainstream production model.