Reuters: GM Is Still Losing As Much As $49,000 On Each Volt It Builds (Update:GM Responds) 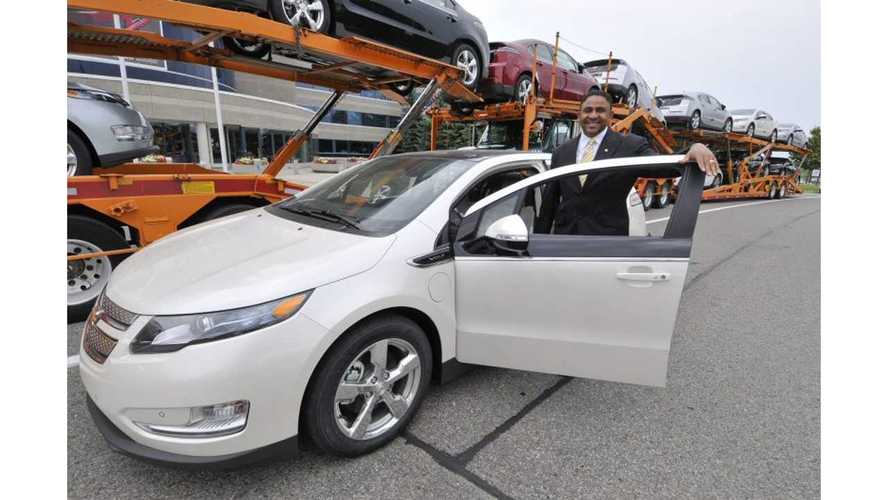 While reporting on the record August sales of the Chevrolet Volt (GM sold 2,831 cars), a trio of Reuters reporters came to the conclusion that GM is losing $49,000 on every copy that GM sells, and that the company may not actually want to sell the car, saying that selling a lot of cars "probably isn't a good thing for the automaker's bottom line."

"Nearly two years after the introduction of the path-breaking plug-in hybrid, GM is still losing as much as $49,000 on each Volt it builds, according to estimates provided to Reuters by industry analysts and manufacturing experts.

Cheap Volt lease offers meant to drive more customers to Chevy showrooms this summer may have pushed that loss even higher. There are some Americans paying just $5,050 to drive around for two years in a vehicle that cost as much as $89,000 to produce."

Ignoring the fact that the $7,500 federal government incentive is also gobbled up in lease transactions, they move on; undeterred by facts or reason.

GM's basic problem is that "the Volt is over-engineered and over-priced," said Dennis Virag, president of the Michigan-based Automotive Consulting Group.

One wonders where the Reuter's writing trio got the chestnut in their head that GM was losing money on every car they sell today in the first place?  From a casual GM quote, naturally:

"It's true, we're not making money yet" on the Volt, said Doug Parks, GM's VP of global product programs and the former Volt development chief, in an interview. The car "eventually will make money. As the volume comes up and we get into the Gen 2 car, we're going to turn (the losses) around," Parks said.

Alright, so how did they come to the conclusion that GM spends "up to $88,000" per car to build the Volt from this quote?

First, they took Doug Park's estimate that GM has spend "a little over" 1 billion dollars in developing the car, and then rounded that up to $1.2 billion (with the help of experts).

Then Reuters divided that number by the 21,500 cars GM has sold in the US since it started production in December of 2010 (let's forget about those pesky Canadian and European Ampera/Volt sales), and assume they won't sell anymore.

Responsible journalism at its best.

In a related news item, I heard that Ford has delivered the first dozen C-Max hybrids, and it cost the company about $500 million to develop the program, and therefore Ford is losing $41,666,667 on every copy they sell.

Tucked inside this 1,000+ word essay on why their outrageous headline makes sense, is this admission by their experts:

"The actual cost to build the Volt is estimated to be an additional $20,000 to $32,000 per vehicle (nice range estimate), according to Munro and the other industry consultants."

So, given that the $1.0 billion is all in a one-time development cost to begin an entirely new breed of automobile, and will be amortized over whatever the end result of production will be (perhaps in the hundreds of thousands), this figure has nothing to do with the ongoing cost of producing the Volt at all, and their statement that selling new Volts "probably isn't a good thing for the automaker's bottom line," or that GM is "losing as much as $49,000 on each Volt it builds"  is total nonsense.

In actual fact according to their experts, GM may be making $7,000 to $19,000 for every new sale the company logs.  That is the story they should have written.

Now, if you want to talk about if GM makes money on the Volt after they pay for all the advertising and marketing of the vehicle they do, that is another story...but Reuters is out to lunch on this one.

If you enjoy being frustrated at poor journalism, might I suggest reading Reuters original story here, there is lots more good stuff.

DETROIT – Reuters’ estimate of the current loss per unit for each Volt sold is grossly wrong, in part because the reporters allocated product development costs across the number of Volts sold instead of allocating across the lifetime volume of the program, which is how business operates. The Reuters’ numbers become more wrong with each Volt sold.

In addition, our core research into battery cells, battery packs, controls, electric motors, regenerative braking and other technologies has applications across multiple current and future products, which will help spread costs over a much higher volume, thereby reducing manufacturing and purchasing costs.  This will eventually lead to profitability for the Volt and future electrified vehicles.

Every investment in technology that GM makes is designed to have a payoff for our customers, to meet future regulatory requirements and add to the bottom line.  The Volt is no different, even if it takes longer to become profitable.

GM is at the forefront of the electrification of the automobile because we are developing innovative technologies and building an enthusiastic – and growing – customer base for vehicles like the Volt.