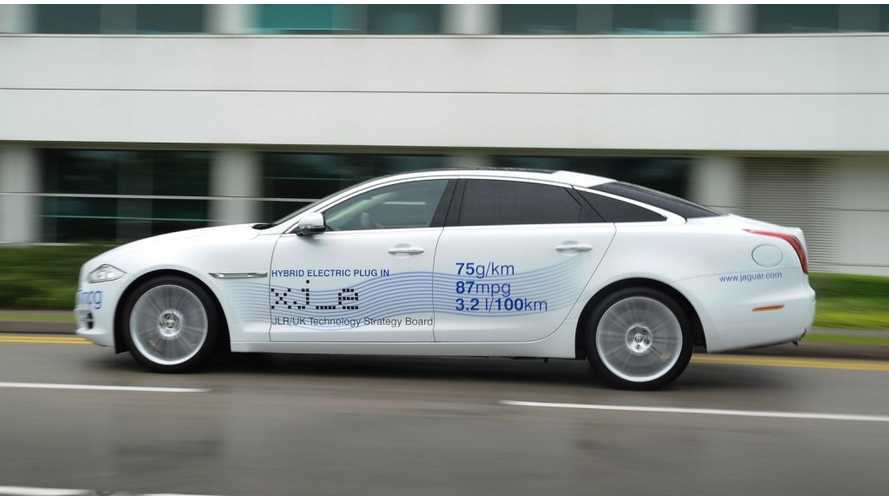 Jaguar is expected to showcase its plug-in hybrid at the 2012 RAC Future Car Challenge in November. The Jaguar XJ_e could be the second possible plug-in hybrid from Jaguar/Land Rover, as there has been a plug-in Range Rover Sport_e shown at the 2011 Geneva Motor Show.

According to Green Car Reports, the Jaguar XJ_e will feature the same a 2.0-liter, turbocharged engine along with a 69kW electric motor powered by the 12.3 kWh lithium-ion battery pack that the vehicle was shown with at the Goodwood Festival of Speed earlier this year.

The combination, according to Jaguar, will allow for a combined 61.2 miles per gallon and only 75 grams per kilometer of CO2 which is 70% less than the current V8 model.

Jaguar also says their XJ_e will be able to travel up to 25 miles on all-electric charge and will almost have the same performance level as the other gas and diesel powered XJs.  Top speed is estimated at 150 miles per hour and should the extended range Jag should sprint from 0 to 60 in around 6.5 seconds.

The RAC Future Car Challenge is set to run early November. Participants this year have yet to be confirmed, however last year competitors included the Nissan LEAF, Chevy Volt, and a wide arrange of other limited run EVs. To learn more about the even, check out their website.

To learn more about the Jaguar XJ_e, take a look at the article from Green Car Reports.

Here is a video about the Range_e by Range Rover: