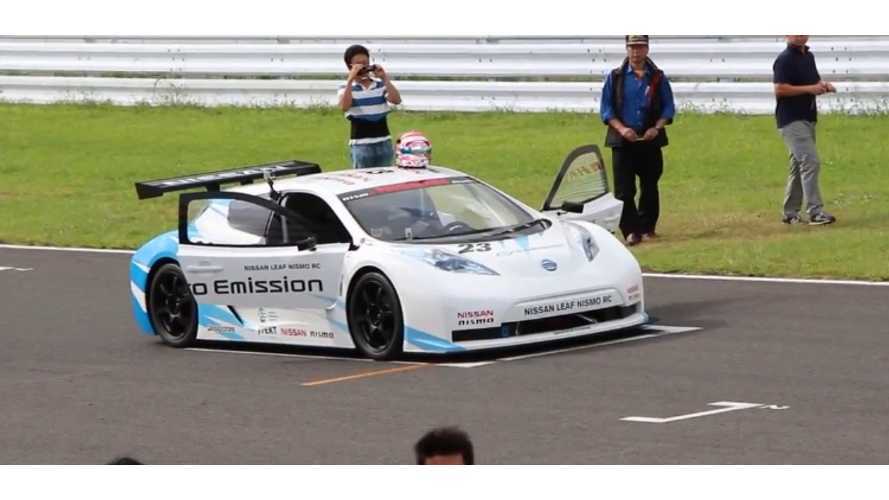 The Nissan LEAF Nismo RC took to the track in Sendai, Japan for its first electric vehicle racing event at the Sportsland Sugo circuit to participate in the Sugo 50km EV race.

While The Nismo LEAF Is Using Stock Electric Component And Motors, It Is Now Rear Wheel Drive

Other competitors at the race were two Tesla track Roadsters, a few street and slightly modified Nissan LEAFs, and some converted to EV vehicles.

Nissan engineers seem both happy with the progress they had made developing the car, and disappointed its superior handling and cornering skills could not overtake the raw power of the winning Tesla on the straightaways.   They also noted they had to be concerned about power conservation over the 50 km (31 mile) track.

Yutaka Suzuki, NISMO chief engineer said, "This was our first race with the Nissan LEAF Nismo RC-and in many ways it was sort of an experiment.  In the end, I think it was great that we came second, even though we really wanted to win.  We have a fast car, and we actually shortened our lap time five or six seconds over the last lap, but I guess we are still not there yet."

The Nissan LEAF Nismo RC uses all the same equipment as the car you can buy at your local dealership, but has been converted and designed as efficiently as possible to credit a race car.

"The major changes we made to increase the dynamic performance as a racing car was moving the motor and the inverter, which were originally at the front, to the back of the car.  So now it is a rear-drive vehicle.  Accordingly the pack is mounted 'mid-ship' to improve handling," said Nismo Powertrain Engineer Mamoru Shinshi.

Nissan has put together a very informative video about the car and its first racing, showing the cars configuration and safety measures that have also been added.

The video ends with the the Nismo team saying it is "going to do their best to win at the next race, so please continue to support us.