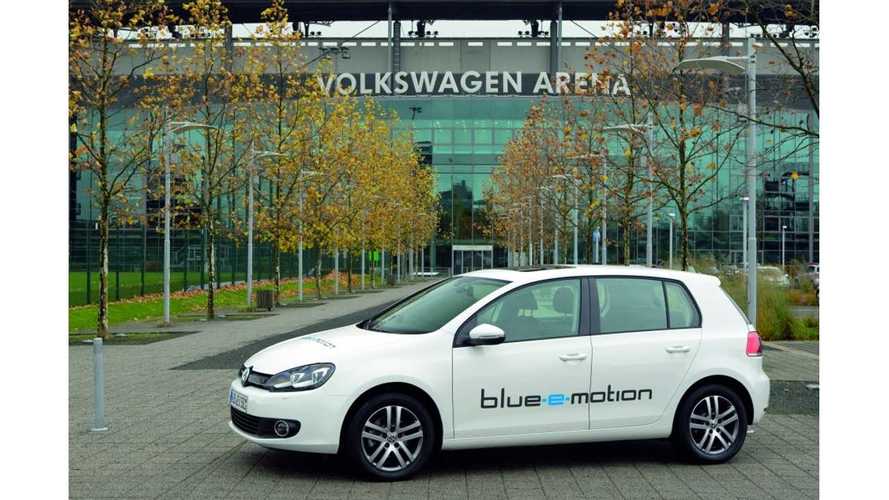 Not yet available to the public, the Golf EV has a super cool charging location

The diesel plug-in EV from VW that we wrote about last week was pretty a pretty nice ride, and will be an excellent EREV; but if you are looking for a pure EV from Volkswagen, you are in luck.

In about a year and a half, VW might be releasing an all electric Golf among the other popular models currently offered. In the mean time, Ellfian Rahim, an automotive journalist based out of Malaysia was able to demo one of these vehicles in the streets of Wolfsburg, Germany.

Other than the decals and lack of exhaust pipe, the Blue-E-Motion has the same look at the gas and diesel versions

On the outside, the Golf Blue-E-Motion has all the looks of the gas or diesel version. That is, other than the large decals on both sides and the fact there is no exhaust pipe out the back.

The Blue-E-Motion could easily be mistaken for any gas or diesel powered vehicle.  Inside will also have many people confused that this is not a standard petrol VW.

With options such as a heated windshield, navigation system, and full power accessories, this EV will rival any other car on the market. However, the only noticeable difference to give away its electric roots is the use of a battery gauge in place of the tachometer.

Although it only has 115 horsepower, this spunky electric motor can go 0-60 in around 11.8 seconds (via Paultan.org)

According to Volkswagen, the lithium-ion battery that is currently installed in the demo vehicle has the ability to travel about 150km, or about 93 miles.

As the vehicle goes into production, though, VW hopes for even longer range as technology, and a weight reduction, increases range to 160-200km, or a maximum range around 124 miles.  We see this as a real possibility if the car retains its 26.5 kWh lithium-ion battery into the public version.

The electric motor has a maximum 115 horsepower and 270 Nm of torque to allow for 0-62mph times of around 11.8 seconds. Top speed is limited to only 83 miles per hour which might make this German EV not ready for the Autobahn.  Like most EVs acceleration at high speeds is limited to put it mildly.

To learn more about the Golf Blue-E-Motion, check out the complete test drive here on Paultan.org.

VW Blue-E-Motion Dash, Mostly the Same As The Petrol Version