How Will You Get Your Focus Electric Home? 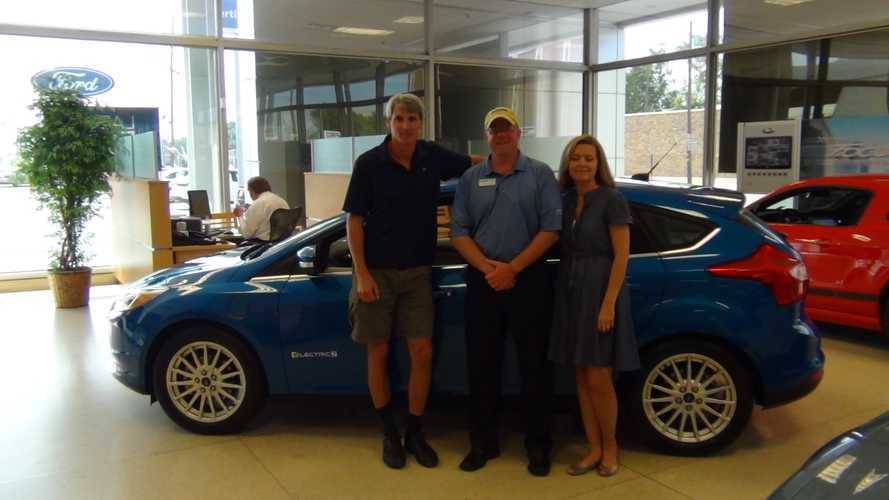 On August 23 my wife and I took delivery of a Ford Focus Electric (FFE) from Richmond Ford in Virginia.  I reserved the Focus Electric in March, and was told to expect a delivery date of late September early October.  In July, sales consultant Jason Tucker informed me that the car would be built August 6th, with an expected delivery of August 20th.  And that is exactly what happened.

Having purchased a Volt last year it has been interesting to compare the two experiences.  On the Volt side, there is a way to track the progress of your car from production to shipping to dealer.  There appears to be no equivalent on the Ford side, so it is nice that Jason kept me informed and that the information was spot on.  When you’ve plunked down your deposit you like to know what is happening.

If you don’t live in a region peppered with charging stations, getting a battery only vehicle like the FFE home from the dealer can be a challenge.   Because of the very limited launch of the FFE, many early adopters have been forced to go outside of their local market to obtain one.  Whit Gallman, one of the earliest to take possession of an FFE, actually towed a car trailer from NC to NY to pick up his FFE.

Luckily for me a dealer with allocation was within the single charge range of the car…or so I hoped. Richmond Ford is about 82 miles by back roads and about  94 miles by highway from my house, according to Mapquest.  You may have noticed that recently Ford and GM have defected from Google Maps to Mapquest.   Given that the Focus Electric is EPA rated at 76 miles, there was some cause for concern, dare I say, range anxiety.  Having driven an EV since 2000, I thought I was over that, turns out I wasn't.

This was entirely reasonable I suppose, given that I only had about 15 minutes behind the wheel of an FFE, on a brief test ride.   I knew that some time behind the wheel of the thing would build confidence in what kind of range it would deliver, but at this moment I was genuinely concerned about running out of electrons before running out of road between Richmond and home.

Entering my destination into the FFE showed 86 miles to my destination, and a fully charged battery with 80 miles of predicted range, which the car conveniently calculated for me as -6.  My wife chimed in with the suggestion that I familiarize myself with any special towing recommendations.  She’s helpful like that.   Based on my reading I was still confident that I would make it, although the -6 had me laughing a bit nervously as I tossed out a joke about needing a very long extension cord.

All joking aside I had packed an extension cord so that if push should come to shove I could stop and beg use of a 120v outlet somewhere.  A back road route was specifically chosen so that we could keep the speed between 45-55mph.  The down side to the “back road route” was that there was no public charging station along the way.   The highway route had a charge station, but it was only 120v, which translates to around 4 miles of recharge for every hour.  And the highway route was 12 miles longer.  I could easily end up waiting 6 hours or more to make up for the longer route and faster speeds.

Since the car comes with road side assistance from Ford I decided to take my chances with the back roads.  I was also buoyed by the results of the Nissan LEAF Range Estimator App, which after taking in a multitude of factors, predicted a range of  91 miles.

Getting out of Richmond was a bit harrowing.  I immediately lost the wife who was trailing me in the Volt. When I last saw her, as we were leaving the dealership, she was ear to ear grin.  And why wouldn’t she be, she was sitting in a car that would seamlessly switch over to gas when its battery was spent.  And though I am certain she loves me, she does revel in sharing stories of my gaffes, which I seem to supply in a never ending stream.  Her favorite being the time I put the tractor in the James River.  Trust me, you do that one time, you might as well throw yourself in the River because you will never hear the end of it.  And no matter how much she messes something up you can't say nothing, cause well cause she never drove a tractor into a river!  There can be no doubt she was sitting back there thinking how funny it would be telling and retelling “the time Marc bought an electric car and had to get it towed home on the very first drive..mwa ha ha ha ha…..ha!”

Throw into the mix a construction project every other block on West Broad St. and the navigation vixen yammering at me because I had blown past the road she wanted due to one of the aforementioned construction projects… and we were off to a bang up start. And now we were up to -7, and I was only driving like 20 mph! In response I turned off the radio, and adjusted the AC to a more balmy 75 degrees and tried not to stare at the -7

After 15 minutes of this hell, the tide began to shift.  I pulled over so my wife could catch up and resume vulture patrol.  The navigation lady gave up on her chosen road and accepted the route we were now traveling and the FFE decided I was only at -5.  We were definitely moving in the right direction. Within 30 minutes I was down to -2, and feeling confident enough to put the AC back to 72f.  A few miles more and I judged the radio privledge could also resume.

In the end I would estimate that I drove at 45 mph 60% of the time, 50 mph 25% of the time and 55 mph maybe during the last 5% of the trip, with the balance at lower speeds dictated by lights and such. The trip ended up being 80 miles.  At the end the car showed I had 11 miles of range left.  I didn’t even trigger the low battery warning.  For those keeping score, the LEAF range estimator app was spot on.

Is it wrong to use this Nissan LEAF app for the Focus Electric?

Looking at myfordmobile.com shows that I used 18 kWh for that trip.  Averaged 223 Wh/mile, brake regen score of 99%, and a driving score of 93.  Oh yeah, Ford has a whole series of things to hook you into their myfordmobile website, among them achievements, trip and charging stats, and driving scores.

Here is the weird part.  MFM says the car fully recharged in 2 hours.  And indeed, the Schneider EV Link charger only had 2 bars showing which indicates 2 hours or less of charging.  How can that be?  How could it recharge 18 kWh worth in 2 hours, with a 6.6 kWh charger?   The next day I drove 30 miles and it charged to 100% in 30 minutes?  What the?  Even substracting the 4 miles of regen it calculates, that means it recharged 26 miles in 30 minutes?  That would be 52 in one hour?  What is happening here? The next day I drove 46 miles and it recharged in 2 hours.  23 miles of recharge per hour is more what I would expect.

I did make an effort to get to the bottom of this charging enigma, but its going to take someone with a TED, and the  patience to log the data, neither of which I possess at this time.  I did use a B&D power monitor to determine that for at least the first 15 minutes of one charging session it was pulling 7.2 kW.  That margin above 6.6 could be efficiency losses or the HVAC running on the car to cool the battery or who knows what.  The 240v Voltec charger which was rated at 3.3kW also tested out at 3.6 kW, which is almost an identical margin.

Tomorrow I’ll dig into some of the likes and dislikes on the FFE.