Best Sales Month Ever For Volt, Over 2,500 Sold In August. And Here Is Why 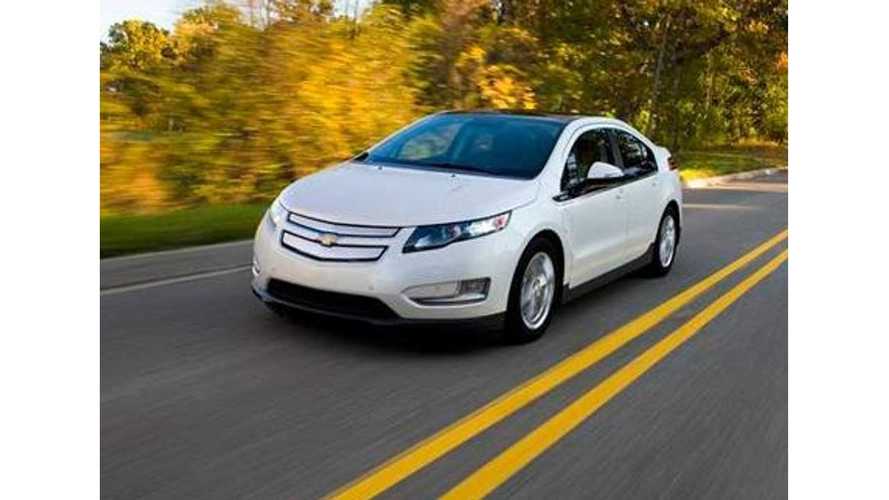 Not content to wait for their monthly sales report to come out next week, and perhaps wanting to underline the recent news that the Volt's Michigan assembly facility is definitely not being idled next month due to any lack of demand, General Motors went public with the news that their Chevrolet Volt has set a record for the most units sold in a month for August.

GM spokes lady Michelle Malko said more than 2,500 Volts have been sold during the month.

"We are seeing sales momentum continuing to build for the Volt, especially in  key markets — California, Michigan, Illinois and Florida. We're  starting to see other markets grow as well. As with a lot of first generation  technologies, it takes time to build customer awareness."

The company says that although the extended range car's assembly plant is shutting down for four weeks, starting September 17th, to 'tool up' for the new Impala, GM will "build ahead Volt production" to meet demand.  As to what exact the demand will be?  GM says they "do not comment" on future production.

Why the sudden take off at the end of the 2012 model year, after three months at a selling level of about 1,700?

Malko said, “As people see their neighbors have one and as they start to understand the technology and are able to drive it, they put it into their consideration.”  While also adding that the 2012s were not being discounted to clear lots.

The last statement is where the water starts to get a little murky.

It Is Not A Discount, But An Incentive To Sell

There is no question the Volt has been a solid seller, especially compared to the other plug-in offerings on the market, besting even the plug-in Prius in 3 of the past 4 months.

However, if you have been in the market for a Volt as of late, there is no way to not notice the massive discounting going on in August.

And while GM is right in saying they are not 'discounting' the outgoing 2012 Volt over the 2013s, InsideEVs has learned that there is a dealer incentive program running behind the scenes that is exerting enormous pressure on many dealers to move Volts (both 2012 and 2013 model years) for way below invoice pricing during August and into early September.

According to sources to InsideEVs, the program works like this:

GM gives each dealership a target number of Volt sales between May and September.  And if that dealership sells triple that number, the dealer gets a $2,500 credit towards future floor product purchases from GM on EVERY Volt they have sold during this period.  The wind down of this program is September 4th.

Alright, How About $3,000 Off Then? Now Really Is The Time To Buy A Chevy Volt

How desperate are you to move those last 20?

What about if you only needed to move 8, like this dealer in Colorado who likely does.  They are offering a 24 month lease for $199/month, calling their sale "8 Volts By September Or Bust!”

To see the dealers fight over Volt sales, take a stroll over to GM-Volt.com's forums under Buying/Leasing to witness the sea of dealers practically begging people to buy their Volts "well under" invoice.  New Volt's have been advertised as low as $34,999 for those truely desperate to move metal.

We imagine some dealers simply shrugged the program off as unattainable, many did not.  Right now, a good bulk of those dealers in the second group are attempting to reach GM's 3x incentive in the dying moments by selling at almost any cost.

But what does this all mean to GM's sales of the Volt?

It means a really huge, disproportional month of August for sales on the Volt, and because incentive doesn't expire until September 4th, next month's sales will have a early head start.

While we should celebrate GM's success in August (and likely September as well to some degree), we should measure that excitement with an understanding that this month's impressive result is probably going to come at the expense of October, November and December.

GM quotes via The Detroit News