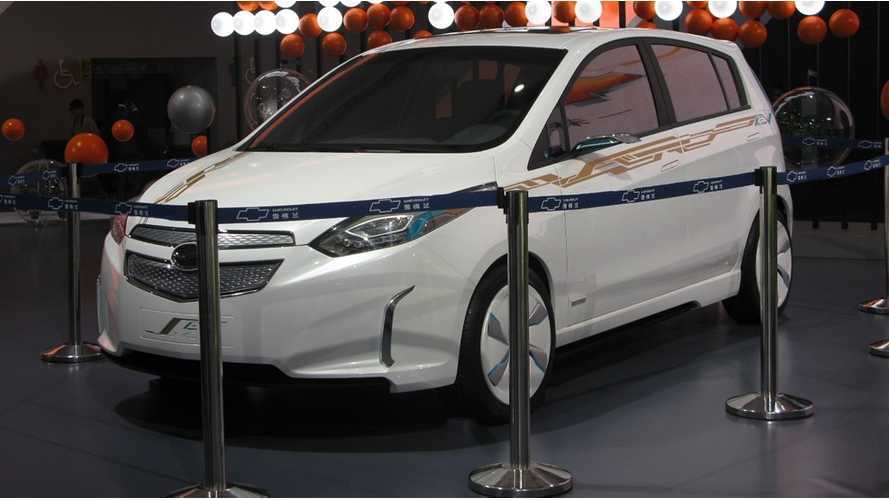 In China, General Motors only sells the Chevrolet Volt in eight cities over 13 dealers, most around Beijing, Shanghai and Guangzhou.  And they don't sell many.

According to Ray Bierzynski, who is head of GM's electric vehicle strategy in China, it is too low to even put a number on, only offering that it was a "very low volume."  Considering the Volt, after various markups and duties, is more than double the almost $40,000 starting MSRP in the US, sluggish sales are not surprising.  Update:  Through June, Chevrolet has sold 18 Volts in China according to LMC Automotive

Still, given the fact that GM actually has a "head of EV strategy" for China, that tells us that they have bigger plans in store, and Mr. Bierzynski lets us in on some of it.

Past the Volt, and the Chinese government's recent mandate to have 500,000 plug-in cars on the road by 2015 and 5 million by 2020 (yes, you heard that number right), GM has confirmed that it will be offering the Cadillac ELR in China just after it goes on sale in the US, although we can't image what the price might be.

As for when exactly the ELR will go on sale in China, CEO Dan Akerson, would only say "soon" in an interview about the subject this past April.  With the Cadillac expected out domestically in the fall of 2013, we imagine early to mid 2014 for China would be a fair estimate.

The GM CEO also said that GM has no plans to build the Volt, ELR, or any Voltec car in China.  However, Mr. Bierzynski says that they are exploring the option to produce an all-electric version of its Chevy Sail, of which, the standard version is a very big  seller in the Chinese market for Chevrolet.

"There's no silver bullet," Bierzynski said, "All of these may have applicability at any given point in time," which underline GM's confusion of whether they will be a high-end player in the plug-in industry in China, or somewhere in the middle.  Perhaps both.

To date, the average buyer for electric vehicles has not been individuals at all in China, with some 84% of all registrations being in the commercial sector.  A trend, that if it continues, might coninue to make the Chevy Colt and future Cadillac ELR sales a touch slow.

The petrol Chevrolet Sail is produced by Shanghai General Motors, and has been on sale in China since 2001, but under the name of the Buick Sail or Opel Corsa B until 2005, since GM had not introduced the Chevrolet brand into the country until then.

Given its entry level amenities and small size, the Sail has been exported to the "who's who" of developing nations around the world ever since it went into production.  Pricing for the Chevrolet Sail ranges from about RMB 57,000 to RMB 68,800 ($9,000-$10,000USD).

GM is currently running a captured test fleet of electric Sails in China.

If put into production, and because the Sail would be built in China, it would be eligible to receive benefit of up to 30% in subsidies from the Chinese government, a perk of which the Volt and upcoming Cadillac ELR do not qualify, further making them a difficult sellagainst cheaper competition in China.  An estimate of around RMB 130,000 ($20,000 USD) is seen as a potential target price for the electric Sail.

In the end, will General Motors built the Chevrolet Sail EV?  Most likely.  Will it be available to buyers in the US and Europe as a low cost EV solution?  Probably not.  Those buyers will have to have to be content with the upcoming Chevrolet Spark EV, which will be sold in 2013 as a 2014 model.

Savior For EV Sales In China For GM?