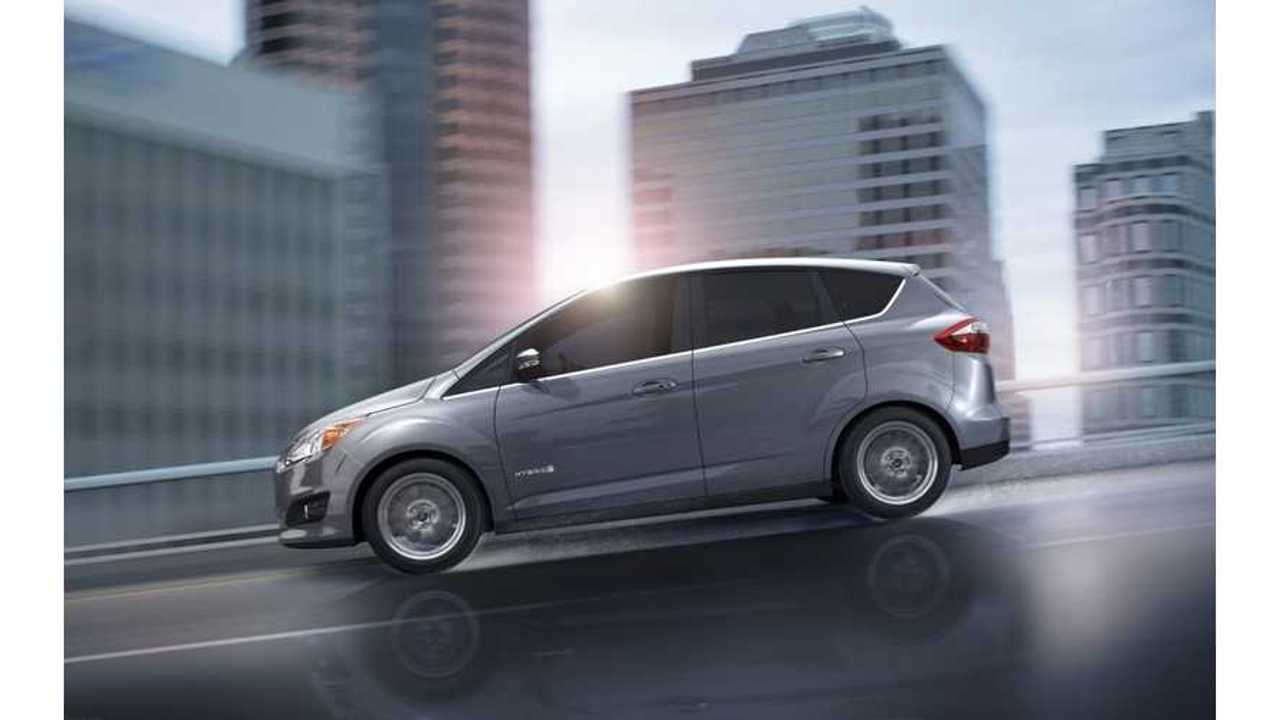 Ford announced (via press release) the all electric top speed (and some other features) of its upcoming C-Max Energi, and it stands at 85 MPH.  And in an uncommon practice amongst automakers, it mentioned one particular competitor a total of FIVE times in that same press release.  That being the 2013 Toyota Prius plug-in.

One of the biggest perceived drawbacks of the plug-in Prius, is that the car kicks out of 'all electric power' and into gas/extended range mode when the speedometer hits 62 mph.  This means for most drivers, at least those of us who don't choose to reside in the right lane, that any highway driving can not be done in electric mode.

Ford also highlights the fact that their plug-in hybrid can drive for over 20 miles all electrically, while the Prius can only do so for 6...which is a technicality of sorts by negating the highway portion of the EPA test.  The Prius can actually drive about 11 miles (or more) provided you don't trip the petrol engine.

The C-Max is priced at $33,745, which not accidentally, makes it just under 30K at $29,995, after federal credits are applied.  The vehicle will be AT-PZEV compliant in California (HOV stickers for everyone!), and will also qualify for an additional $1,500 credit in that state.  The Prius plug-in, has a lower starting MSRP of $32,760, but qualifies for less incentives because of its smaller battery, and actually nets out about $260 more at $30,255 in the end.

Here are the bullet points from Ford on the C-Max:

The C-Max also has 3 EV Modes.  Drivers can opt for electric-only driving without gasoline engine power, normal hybrid mode where the powertrain melds electric and gasoline engine power as appropriate, or a battery-saving mode that reserves the pack power for later use. When plug-in power is available, drivers can change modes with each press of the EV mode button. The mode currently selected is displayed in the driver’s left instrument cluster screen.

EV: Auto
“In EV: Auto mode, the vehicle automatically takes advantage of plug-in charge,” said Kevin Layden, Ford director of Electrification Programs and Engineering. “When the charge is depleted, C-MAX Energi operates as a full hybrid.”
The powertrain computer automatically selects the appropriate blend of battery usage and engine usage based on demand and the state of battery charge.
EV: Now
In EV: Now mode, the vehicle operates in EV mode using plug-in power. The gasoline engine will not operate unless an override setting is selected or certain conditions are present such as the accelerator pedal being fully depressed and the driver enabling the gas engine. EV: Now also activates a special Manage EV screen to monitor functionality.
To achieve the EV range estimate shown on the corresponding gauge, drivers are given coaching cues to maximize EV mode. Additionally, use of climate power and energy gauges will further help drivers manage vehicle energy use.
EV: Later
The EV: Later setting saves plug-in power for later use, like transitioning from highway to lower-speed residential neighborhood use. C-MAX Energi operates in normal hybrid mode, using both gas engine and electric motor. Plug-in power is reserved until the driver switches to the EV: Now or EV: Auto setting.

The 95 MPGe, Ford C-Max Energi will be available at Certified Ford dealers in 19 markets (think anywhere you can buy a Ford Focus Electric), followed by nationwide rollout in all 50 states in early 2013.