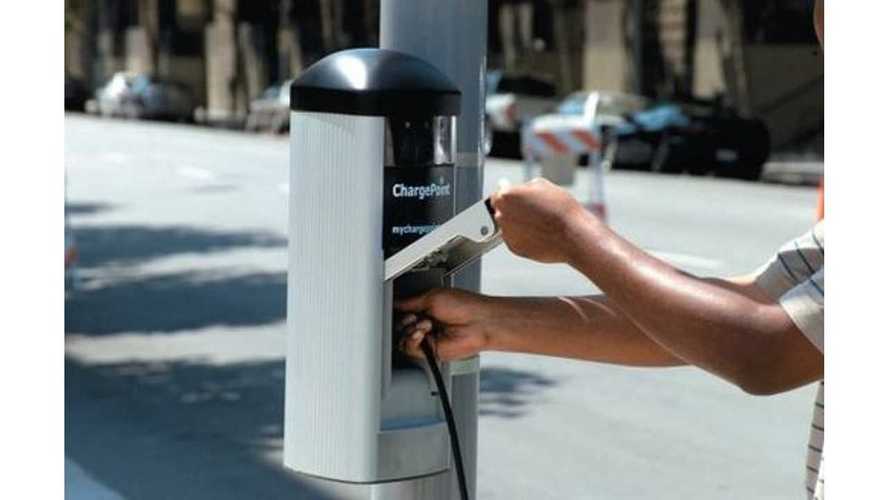 Electric vehicle charging stations currently charge one of two ways, by the kWh, or by the amount of time spent plugged in.

As an owner of a charging station, charging by the time plugged in is what is desired because it nets more revenue.  "By the hour" charging is also more difficult for the consumer to realize the amount of premium they are paying for electricity over just plugging in at home.

As a EV owner, most want third party charging stations to not only be convenient and available in their area, but to be charge at a flat, reasonable fee per kWh.  Exactly how many cents per kWh that might be however, is up for debate.

An additional  factor of  timed charging rates to consider is that different cars can charge at different rates, and therefore are different value propositions.  At an L2 station, the Nissan LEAF can only charge at a rate of 3.3 kW, while the Focus Electric or Tesla Model S, can allow for double that, at 6.6 kW.  Essentially, your choice of electric vehicle can net you a 50% discount at the charger, or a 100% increase over your peers; depending on your prospective.

Charging Stations Will High Costs Will Likely Find Themselves Abandoned

Regardless of which payment structure you prefer, the cost for service at the machine will ultimately, at some point, be determined by the price the market will bear.  While many stations have just been put into operation, and others have just begun charging for electricity, those market forces are already at work.

The Christian Science Monitor recently sat down with two executives from Coulomb Technologies (which is currently installing the ChargePoint network) to get their take on the industry, and how it is unfolding after two years of experience.

They suggest that consumers will quickly find the stations that charge a 'fair price' and use those almost exclusively, shunning others they feel are over charging, or gouging.

The Coulomb execs tell CSM that the most common practice for charging is an hourly rate, and is employed by 80% of those stations currently providing a payment for electricity service.  As for the consumer, the execs says that they unanimously want pay to per kWh.

The decision to not structure the payment process the way the customers wants is not entirely the charge station owner's fault, as many states do not allow  private businesses to set electric rates, that is reserved only for utilities that are regulated by the government.

Addressing this problem, California recently passed a law (AB631) that allows charging station owners to decide how they want to set charging fees: per hour or per kilowatt-hour, and many states are expected to follow California's lead in the near future.

Pat Romano, CEO of Coulomb Technologies, says that "$2 is expensive per hour," but that prices will "settle in" as EV owners become more educated and more stations are available.  Romano says they are "advocates of per kilowatt pricing,” which makes sense because they are in the business of selling the chargers and have no control (or financial gain) over the revenues of the chargers directly.

Richard Lowenthal, founder and Chief Technology Officer of Coulomb, added that in some areas change is already occurring.  In Palo Alto, California, there was two ChargePoint stations both charging $5 an hour, and both found their business to be non-existent.  Today, one charging station is free and the other costs just 50 cents an hour, and are utilized frequently.

The sweet spot for charging per hour, or at least what customers are willing to pay on a regular basis, seems to be $1 per hour.  At this rate, most stations are well utilized, while anything priced above that, and the opposite is true.

Romano and Lowenthal both believe government and work place charging spots are likely to remain free for the longest period of time as they have an interest to promote the electric movement in the community and for their workers.  They also point out that free charge points can mean added incentive to high income buyers of electric vehicles to shop at malls and places of business that provide the service.