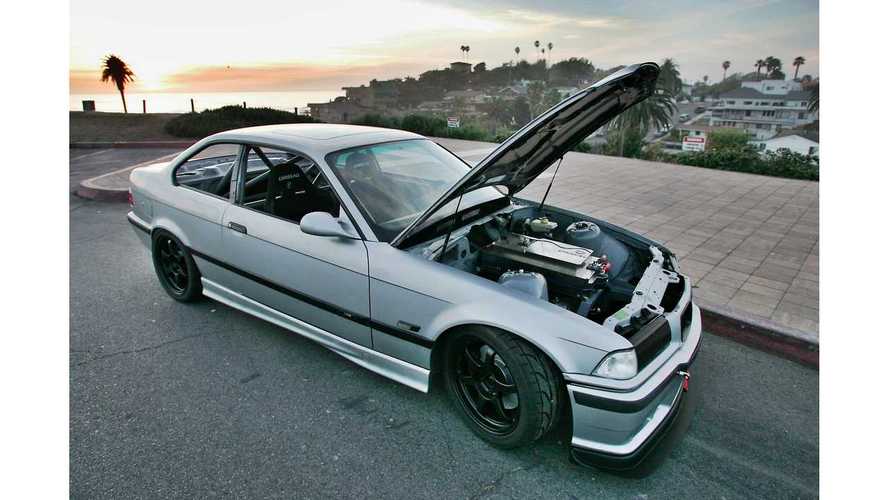 EV West has had visions of placing their 1995 BMW E36 M3 into the 2012 Pike's Peak race this year, but no one has confirmed the electric powered M3 was going to be ready... until now.

EV West, a custom "electric" car shop, that offers all sorts of parts and accessories to convert your car into a electric monster, has produced a 700 horsepower, 1995 BMW E36 M3 coupe, and prepped it to run at the Pike's Peak race this year. The vehicle is powered by a pair of 11-inch electric motors that produce a total of 700-horsepower. A custom designed externally pumped Powerglide transmission has two gears. Thanks to its configuration, the EV West M3 doesn't need a torque converter and runs directly with a Turbo 400 female shaft making the car act as a manual transmission even though its an auto.

Bill Caswell, a rally car expert and Pike's Peak professional, was invited down the EV West's garage to test out the M3. With great enthusiasm, Caswell asked to take the car to the race track since the rawness of instant torque actually sent shivers through his body. Take a look at the video:

Although this M3 will, hopefully, be EV West's claim to fame, they currently use a custom Ford Ranger EV as a shop truck. Other projects include a Toyota MR2 and Porsche 912. Take a look at their website for more information on current projects and aftermarket parts. EV West also released a teaser video awhile ago, but if you missed it, take a look:

Take a look at some of these other pictures from EV West's facebook:

The custom engine in the shop vehicle at EV West. By the way, it still uses a 5-speed manual transmission