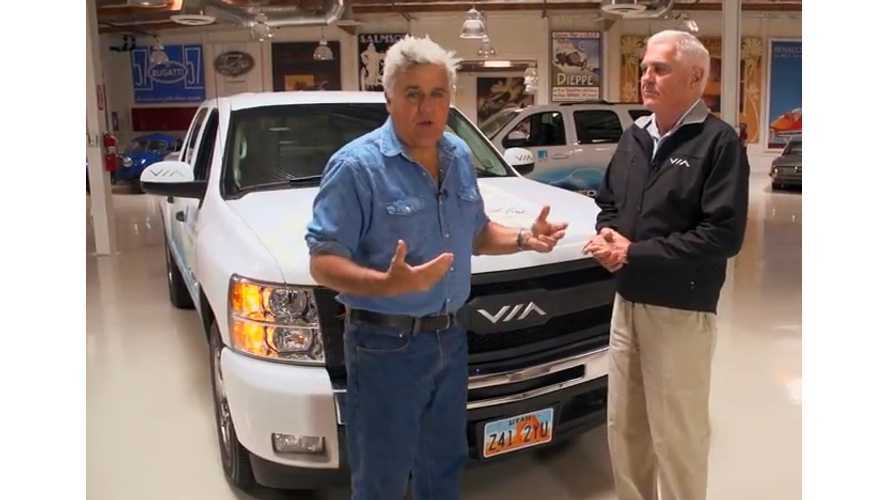 Bob Lutz, of General Motors fame, is a classic old school car guy.  As is comedian Jay Leno, so it makes sense the two would someday meet up to do a segment on VIA's extended range truck (of which Lutz is a member of the board) on Jay's car show.

Borrowing from the concept behind the Chevrolet Volt, the VIA truck (think Silverado) uses lithium battery to propel the vehicle for up to 40 miles, before switching over to a  GM sourced 4.3 liter V6.

The tagline for VIA's lineup of EREV trucks is one most of us can appreciate, "The fuel economy of a Prius™ with the payload of a pickup"

According to the company: "With 40 miles of battery range, most drivers won’t burn any gas in a typical day. Driving 50 miles in a day, 40 miles on batteries and 10 miles with the help of the range extender, the typical driver would average about 100 miles per gallon in gas fuel economy. When driving beyond battery range, the VTRUX still gets significantly better fuel economy than the gas model "

The trucks also come with an option for "exportable power for the work site." The VTRUX power export module provides 15 kW at 30 amps of onboard mobile power.  Additionally, a utility grade output module, now in development, is designed to provide 50 kW of mobile emergency power to keep critical facilities online.

Both Jay and Bob seem to be having a good time tooling around in the VTRUX, which according to VIA, has an "anticipated selling price (of) $79,000 in volume."  Vehicles can be reserved online here, with a $1,000 down.

After watching the video, and if you have some extra time to kill, why not check out his consulting firm's (Lutz Communications) website.  It is amateurishly delicious.