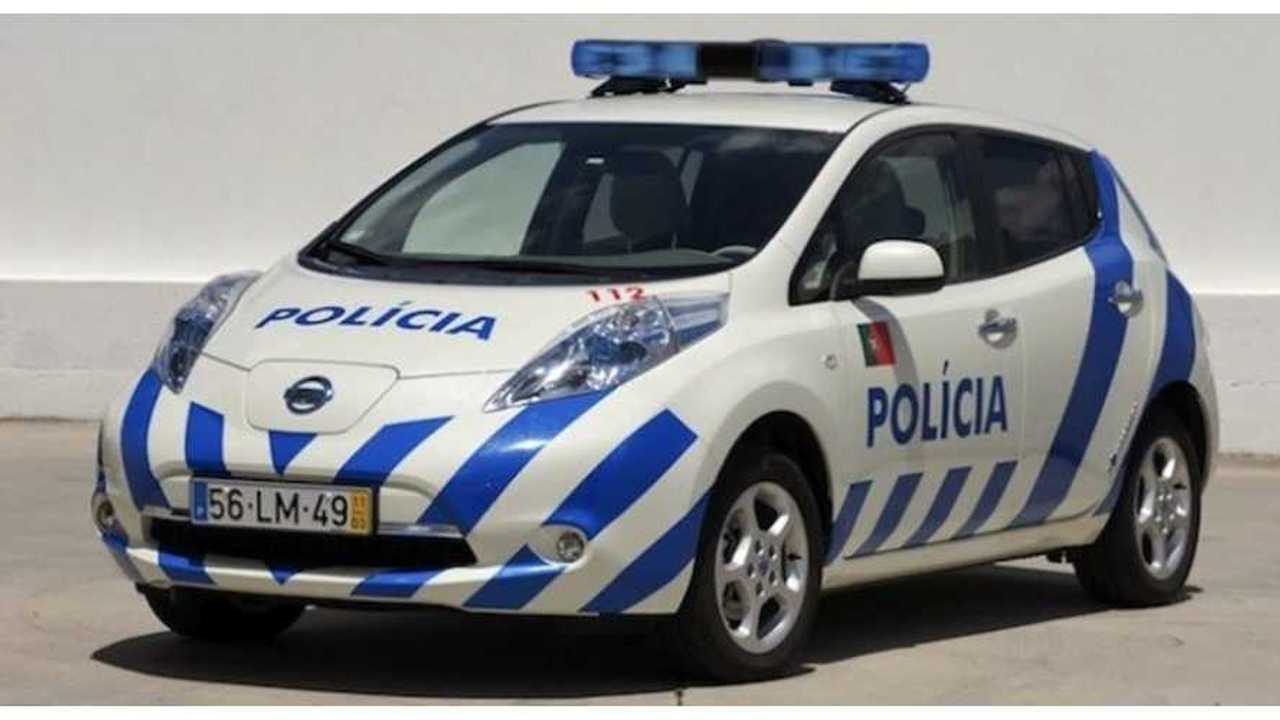 Jul 12, 2012 at 1:10pm ET
++
By: James Melvin
The Thin Blue Line that serves and protects may soon be colored green as the Portuguese have become the first to add battery electric police cruisers to their fleet. The country's police force ( or Policia de Seguranca Publica / PSP ) added 8 Nissan Leafs to it's fleet of over 5,000 vehicles.

The EV police units will begin duty in urban areas mostly for it's “Safe Schools” program ( think D.A.R.E. here in the U.S. ) which also provide secure school watch as well as public education. Portuguese officials said the cars will be able to perform other police duties since they are equipped with full law enforcement markings, flashing lights and sirens.

“ We want to continue reducing pollution in large urban centers and the introduction of the 100% electric Nissan Leaf sets a new benchmark for our fleet”, said PSP Superintendent Paul Gomez Valente.

Portugal has been an EV pioneer in Europe, as one of the first countries to install an EV charge network and the first market in Europe to sell the Leaf when it was introduced in 2011.

The idea of a silent “Officer Friendly” pulling over the bad guys isn't new as we know the N.Y.P.D. pressed 50 Chevrolet Volts into service in 2011 with 20 doing parking and traffic enforcement, replete with onboard computer and radio systems, external light bars, NYPD markings and sirens. Although NYC never intended the plug-in EREVs to perform high-speed chases, they're fully capable of doing so. New York has taken the lead in reducing it's carbon footprint here in the USA by field testing electric maxi scooters ( Vectrix ), stand up scooters ( Go-Ped ) and implementing over 70 electric vehicles in their fleet. 10 Navistar E-Star utility trucks and 10 Transit Connect electric vans do duty for the Fire Department, Departments of Correction, Sanitation and Environmental Services.

In Britain a recent Intelligent Transport Systems competition run by the Association of Chief Police Officers -- the U.K. equivalent of superintendents -- a 2012 Vauxhall Ampera ( Chevrolet Volt ) won top place for its crime-fighting potential. The British Ampera crime fighters are fitted with additional computer equipment to enable law enforcement officers to connect directly to police databases. The cop cars also include all-round cameras for evidence gathering and dual screens to enable either passenger or front passenger to operate the police equipment. One cannot ignore the beauty of stealth in investigation when an electric vehicle can silently approach lawbreakers without the usual ICE warning.

Crowded urban areas seem the perfect place for municipalities to reduce consumption and pollution with Evs in their fleets, eventually leading to cost savings in the long term. We can't leave out leading by example in the community so we see it as a big win-win.

Portugal is no stranger to pioneers. Explorers Vasco da Gama and Ferdinand Magellan would be proud. Hats off to Portugal's implementation of Leaf cop cars. Soon, the reckless-driving scourge of the streets will be silently snuck up upon, and pulled over by an all-electric patrol car, to the hail of “ “Puxe-O dirtbag!” or: “Pull it over dirtbag!”, in Portuguese!