Efficient Cars And EVs Killing Demand For Gas In Japan, US Next? 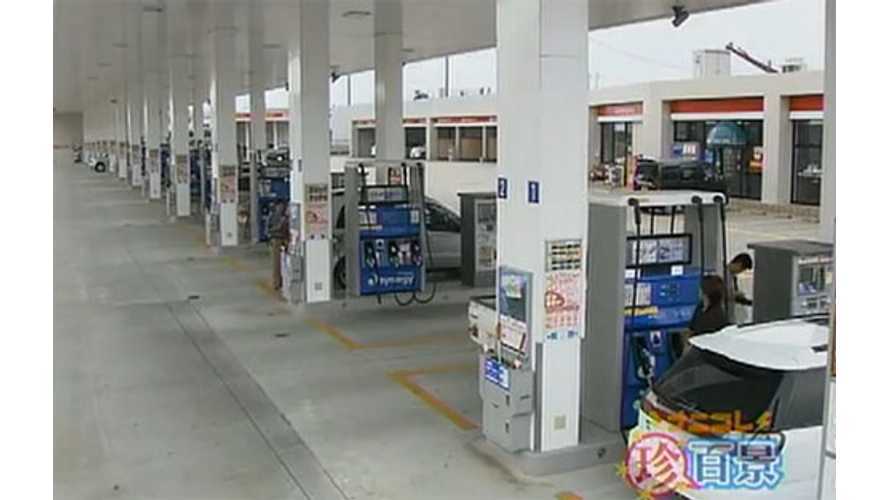 In the past one could argue that there was a natural ebb and flow of gasoline prices, and that any changes were the product of regional supply issues, or greater worldwide economic pressures affecting the pocket book of consumers.  And for the most part, that is still true.

Except in Japan.  That country has been using less and less crude, which has been allowing the price to not only drop precipitously over the past year and a half, but more importantly, has decreased the overall demand at the pumps as well.

Japan is the unashamed leader in all things small in cars.  They even have a segment below subcompact, kei (or  keijidōsha if you will), which loosely translated means light automobile.

These cars are noticeable not only by their diminutive size, but their specialized yellow and black license plates.  And if you think this segment is just a small off-shoot of the car industry in Japan (like the Mitsubishi i or SMART Fortwo  here in the US), you would be wrong.  As an example of thier proliferation in Japan, one out of every four cars Honda sells in the country are in this category...and they are lagging behind.   Overall, kei cars account for 35% of all automobiles sold.

These cars (and the government discounts and rebates that come with them) alone have put incredible downward pressure on the country's gas needs, but now electric cars are pushing individual petrol needs even lower.

Electric car adoption is highest worldwide in Japan, which inherently make sense given Japan is an island and has an intense urban, and relatively wealthy population.   Since the beginning of last year, over 50,000 fully road capable plug-in EVs have been sold, with more than 4,000 being added to that number every month.  A number which is growing rapidly, and is estimated to double by the end of next year.

And while 4,000 plug-in EVs sold a month doesn't sound like a huge number, one has to consider that while Japan has about 40%the population of the US, they only sold 2.7 million regular (non-kei) cars last year.

The effect of all these kei and plug-in cars?  Gas will hit a 17 month low this month in Japan, but more important than the price, is that actual consumer total demand for crude is plunging, as the country as gone from a peak of 60,000 gas pumps in the 90s to just under 38,000 today.  Who cares how much gas is if you aren't using any?  Or if you are only using half as much as you used to.

Japan's dependency level on oil peaked right around the millennium.  And thanks to a change in transportation vehicle demographics, has since fallen 7% (despite a recent hiccup with all nuclear power going offline in March of 2011 after a giant tsunami hit the coast of Japan).   Overall oil consumption is expected to fall by at least another 6% by 2020.

The ANR (Agency for Natural Resources) says that in about 15 years, over half the cars on Japanese roads will be electric vehicles, and the other half will consist mostly of small minicars and hybrids.   Japan can look forward to even less pumps in their future.

This impressive result today in Japan is one the administration in Washington is hoping to emulate in some way over the coming decade.  While it is highly unlikely US consumers will ever accept supermini cars as an answer to the cost of gas, vehicles with plugs are a different story.