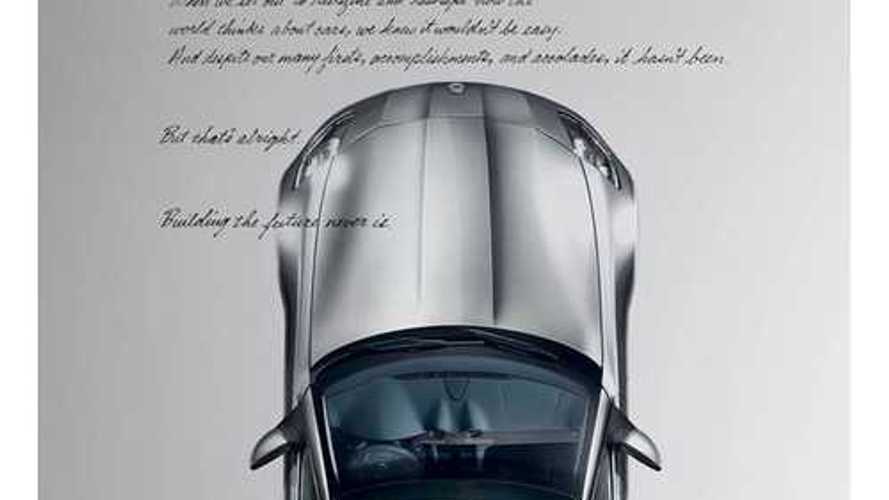 It is likely that Fisker is on the brink.  Just as Tesla is an electric car start-up and has begun deliveries of its flagship Model S sedan, so Fisker too is a start-up.

Only it hasn't been so rosy for Fisker.

Their vehicles have been delivered but after long delays.  They are expensive at $100,000 a piece and for a range-extended electric car, fuel economy isn't so terrific.  Efficiency has been reduced in exchange for power and speed the luxury minded would expect.

Furthermore, the company has over $500 million in government funding frozen due to delays, and recently the Karma  came under investigation as the cause of a home garage fire possibly from an overheated engine compartment.  Cars have also been recalled due to battery problems caused by supplier A123

In spite of all these woes the company says it is motoring on.

A new ad campaign talks about this and has just been published on a full page of the Wall Street Journal and will be followed by similar marketing in the coming months.

"When we set out to redefine and reshape how the world thinks about cars, we knew it wouldn't be easy," the ad says. "And despite our many firsts, accomplishments, and accolades, it hasn't been."

"But that's alright. Building the future never is," the ad concludes.

Generally when ads talk about their company's weakness, failures, and need to come back from behind, probably the show is over.  But you never know.