Chevrolet Volt To Have Best Sales Month Ever In June? 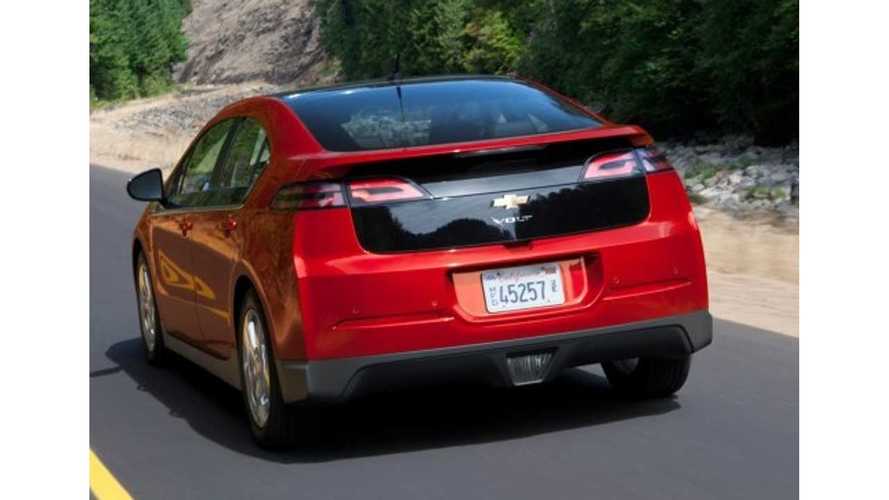 Despite a somewhat rocky start, both in sales and image, the Chevrolet Volt has been staging somewhat of a comeback of late.  Not only have the long term reviews and reliability figures been superb on the car, but you can't help but notice sales have rebounded nicely as well.

Ask GM, or their dealers about the reason behind the resurgence, and it is quite clear, it is because of a sticker.  The new, mid-product cycle, 2012 model year Volt now qualifies for California's high-occupancy vehicle sticker.

This sticker not only indicates your eco-friendliness, but allows a single driver to use a highway lane reserved for multiple occupants.   Having a HOV sticker means valuable time is shaved off your daily commute in California.  And as they say, "time is money."

Ron Vartanian, general manager at Bunnin Chevrolet in Culver City (outside LA) , said his store sold 26 Volts during the second half of May after  getting a fresh load of the new models. Before that, he said, the store had been  averaging six or seven sales a month.  "When the HOV cars became available, we had a backlog of people wanting  them," Vartanian said. "I thought we'd have a tough time in June, but we've  already sold 12."

When the Volt first hit the market, it did not comply with California's strict emissions profile to qualify for the sticker, so engineers at GM went to work on the problem.   Adding a secondary air-injection pump to the catalytic converter to strip out more pollutants did the trick, and now the Volt has a huge selling feature to add to the price equation.

Ken Ross, owner of Team Chevrolet-Cadillac in Vallejo, Calif., told Auto News, his store sold 15 Volts in May, up from an average of three or  four a month, saying supply "still hasn't caught up" with demand, though he has  30 Volts en route to his store.

More than 1 out of every 5 Volts sold, are sold in California, and according to a GM spokesman "that percentage should grow as sales of the low-emissions version accelerate," while also noting that "the company is "on track to have one of our strongest Volt months since  launch."

Another factor underpinning sales not just in California, but across the country is an incentive that gives a bonus of $2,500 per Volt to dealerships that meet sales volume levels set by the company (a handy factoid to have in hand if you find yourself currently negotiating a deal on a 2012 Volt, HOV  sticker or not).