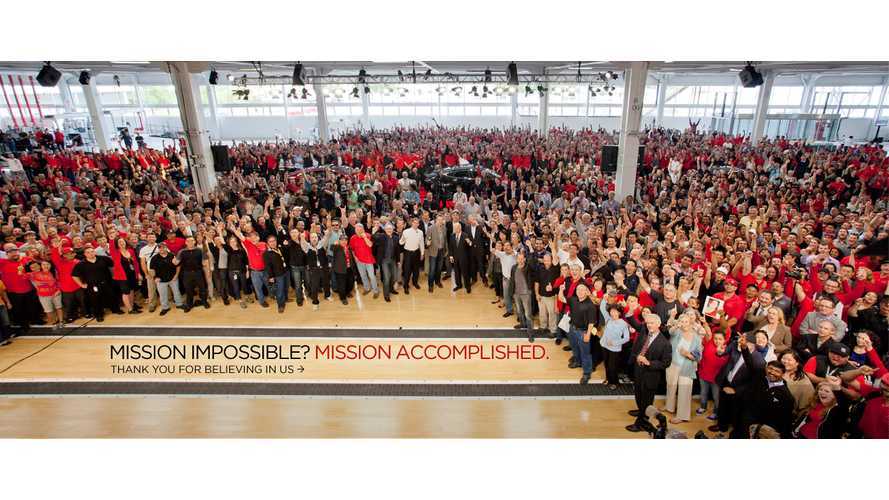 Three years ago, Tesla announced they would be bringing a high performance electric vehicle to the market.  Last year, the CEO of the compnay, Elon Musk promised that it would arrive by the end of July.  With deliveries to eight customers today (and two earlier to board member Steve Jurvetson and Elon himself), Tesla bettered even their own optimism, no small feat in the EV industry.

Mr. Musk, who is the real life persona that Robert Downey Jr.'s Iron Man character (Tony Stark) is fashioned after, was not at a loss for words touting his company's finest achievement:

“The world has been under this illusion that electric cars cannot be as good as gasoline cars.   That if you have to go with an electric car you’re accepting the car is worse.  What the Model S is about is breaking that illusion, it is about showing that an electric car can be the best car in the world.”

It is also worth noting that Tesla is not stuck for future buyers at this point.  All of next year's capacity (and then some) is spoken for.  Over 10,000 reservations in total have been placed for the Model S.

As for the future success of the company, Mr. Musk said that Tesla will be cash flow positive if it can sell 8,000 copies of the Model S during 2013.

Past 2013, the CEO said with the addition of the Model X, (a refashioned Model S into SUV form), the company expects to sell 35,000 units in 2014.  This is where most analysts begin to question Tesla on whether or not the entire high-end, luxury electric market is large enough to support the company, let alone any other players in the segment.  Tesla expects to produce a lower cost pure electric vehicle in 2015 to increase volume production.