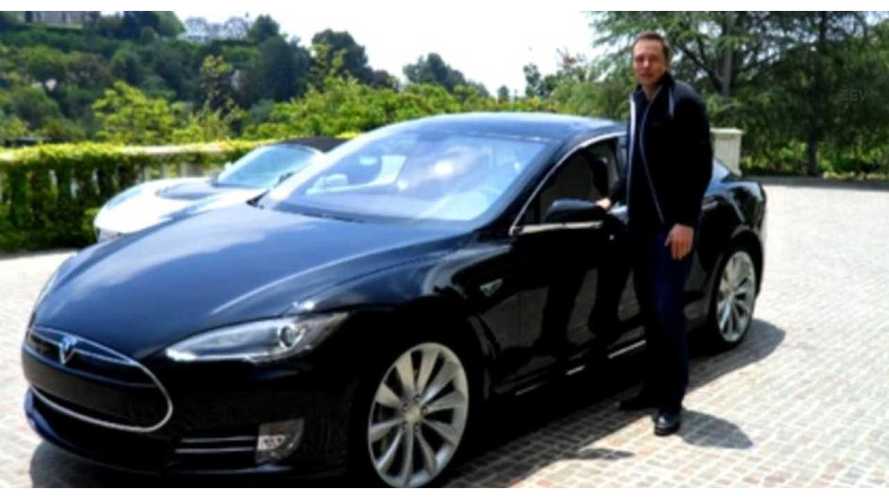 On Friday (June 22nd), the official launch of the Model S will occur, with the first customer deliveries happening at an event at the Tesla Factory in Fremont, California.  However, as reported earlier, this would not be the first true delivery, as news that Tesla board member Steve Jurvetson had already received the first car at an internal ceremony.

What wasn't reported at the time was that two early Model S cars had actually been delivered, the second being to Tesla CEO Elon Musk.

Apparently, several days before the photos of Jurvetson driving his Model S hit the web, both men had received their cars.   In fact, friday, June 1st is when Steve got his car, a red signature performance edition, VIN#5YJSA1DP8CFF00001.  Then on the very next day, Elon Musk took posession of his car, which is a black version of the same model, and with a vanilla interior, VIN 5YJSA1DP8CFF00002.

The Tesla CEO himself explains why Jurvetson and himself got their cars before the big day:

"...the reason those two cars are going to Steve and myself is so that we can spend a few weeks just going through the cars in detail and experiencing any tiny issues ourselves before regular customers experience them them.  I think its really important to thoroughly test your own product and be extremely tough on it before giving it to general customers" and goes on to explain how issues have been identified and fixed before the big day.

I expect no one reading this actually believes it is necessary for the CEO and his friend to receive title to the first two production cars three weeks early as a quality control measure, but it is Elon's world, so...moving on.

As for the event itself on June 22nd, Musk says that there will not only be one car delivered, but ten cars in total.  All of which will be to "non Tesla insiders."